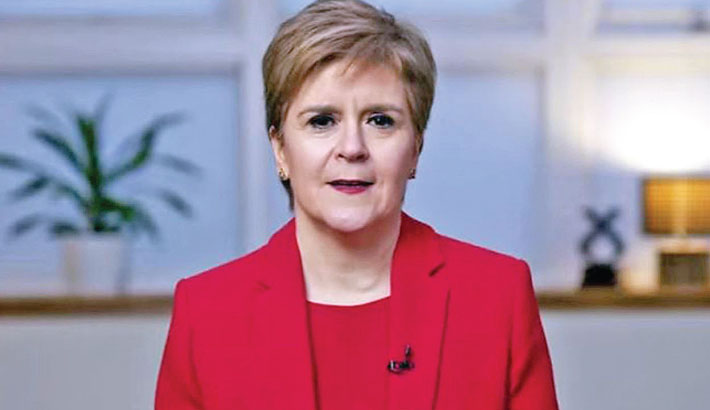 LONDON: Scotland’s First Minister Nicola Sturgeon on Sunday said she planned to hold a legal referendum on independence from Britain despite Westminster’s opposition, as an opinion poll showed a majority would vote yes, reports AFP.

If her Scottish National Party (SNP) wins a strong showing in regional elections in May, Sturgeon said she would seek a fresh referendum even though Prime Minister Boris Johnson has said such a vote should only be held once in a generation.

“I want to have a legal referendum, that is what I am going to seek the authority of the Scottish people for in May and if they give me that authority, that’s what I intend to do,” she told the BBC’s Andrew Marr Show. Johnson “will flatly refuse the demand,” The Sunday Times quoted senior government sources as saying.

Sturgeon cited the fact that “the polls now show that a majority of people in Scotland want independence”. A Sunday Times poll found 50 percent of Scottish voters wanted another referendum in the next five years and 49 percent would vote for independence, while 44 percent would reject it. A 2014 referendum saw 55 percent vote “no.”

The Sunday Times quoted a forecast that the SNP will win a “landslide” in May polls for the Scottish parliament, giving Sturgeon a strong basis to call for the vote. She spoke as the Scottish National Party (SNP) was due to discuss its “roadmap to a referendum” at a policy forum on Sunday. The SNP says it will request a Section 30 order from the British government allowing the holding of another referendum. If this is refused it intends to push through its own legislation to prepare for a referendum and “vigorously” oppose a legal challenge from London.

The newspaper poll found 50 percent of Scottish voters wanted another independence referendum in the next five years, despite the fact only 22 percent thought an independent country would be better off economically.

“Brexit and the coronavirus crisis... appear to be driving Scottish voters away from union with England,” the newspaper wrote.

Twenty-two percent thought Johnson had done a good job in tackling the pandemic, versus 61 percent for Sturgeon.

The poll also found 53 percent in Scotland would vote to rejoin the EU.