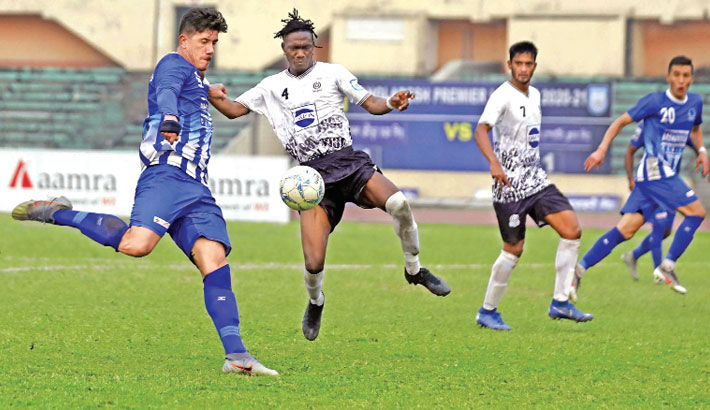 Players of Sheikh Russel KC Ltd and Mohammedan SC Ltd vie for the ball during their Bangladesh Premier League Football match at the Bangabandhu National Stadium in the capital on Sunday. – SUN PHOTO

Sheikh Russel KC maintained their unbeaten run in the 13-team Bangladesh Premier League (BPL) Football playing to 1-1 draw with Dhaka Mohammedan SC in their third match at the Bangabandhu National Stadium in Dhaka on Sunday.

Dhaka Mohammedan, which made a flying start outplaying their neighbour Arambagh KS 3-O in their first match, bagged four points from three outings with one win, one draw and one loss.

In the day's match, Souleymane Diabate of Mali put the traditional black and whites Mohammedan ahead in the stoppage time of the first half (45+1 minute) from a penalty (1-0).  Brazilian centre forward Giancarlo Rodrigues Lopes levelled the margin for Sheikh Russel in the 56th minute (1-1).

Mehedi Hasan Royal scored the match-winner for the freedom fighters team Muktijoddha in the 47th minute (1-0).

After the match, Muktijoddha SKC earned three points from two league encounters while Arambagh remained at the bottom of the league without any point, playing three matches.