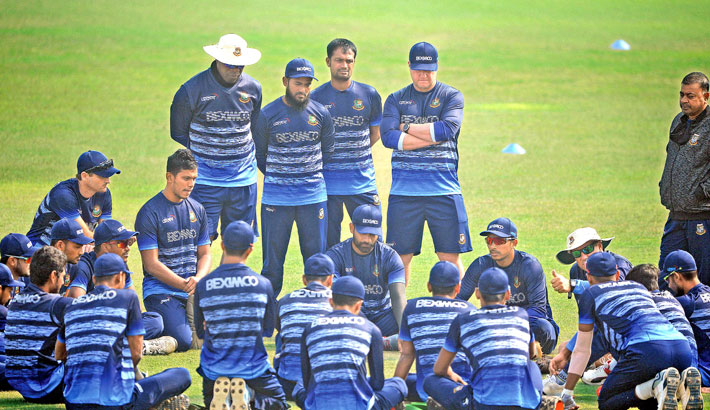 Bangladesh seem to be in a relaxed mood after winning their first two one-day internationals against West Indies and are looking forward to a clean-sweep when they take on the visitors for the third and final ODI in Chattogram today.

Ace all-rounder Shakib Al Hasan turned out to be a prankster as he was seen joking with the newly-appointed batting coach Jon Lewis in the nets on Sunday ahead of the dead-rubber contest at the Zahur Ahmed Chowdhury Stadium.

Both Bangladesh and West Indies completed their lone practice session at the same venue ahead of the series concluding third ODI with Tigers already taken an unassailable 2-0 lead in the series.

Bangladesh are now preparing in a bid to inflict a whitewash on West Indies for the second time in their history after 2009 when they played against a similar Caribbean side while the first choice players skipped the series due to the financial spat with the board.

Though the hosts have now won three ODI series on the trot against West Indies, it will be also a big opportunity for Tigers as they couldn’t have whitewashed weaker sides in recent past both at home and away.

However, Tigers are not willing to take anything for granted and possibly because of head coach Russell Domingo and chief selector Minhajul Abedin had a long chat with experienced Mahmudullah on Sunday.

Like a regular member of the team management, skipper Tamim Iqbal also seemed determined not to give their opponent an inch as they look to wrap up the three-match ODI series in style.

“We have won the series but still we have the chance to get 10 points. West Indies could not play well in the opening two games but they are a dangerous side and can turn around anytime,” said Tamim on Sunday.

“We might have very few changes but I am sure those who will come can win matches for us. Whenever they got a chance they did well.

“There is fierce competition in the dressing room and everyone wants to do well in the field and I hope this will continue. There are 10 points at stake so we can’t take anything for granted,” he added.

Bangladesh moved to the third spot on the points table of ICC Super League, behind Australia and England after the series win but that hardly made them complacent as these points will matter in the long run.

The top eight teams (including hosts India) will gain direct entry to the 2023 ICC World Cup while the bottom five teams will have to play in a qualifying event in Zimbabwe.

Despite winning the first two matches, Tamim wanted his top-order batsmen to complete the job after getting set at the wicket.

“I am sure there are lots of areas to improve. You can play a clinical match very rarely. We can improve in three departments like we can do a little better in our bowling and fielding.

“In the batting department, we can’t finish off the game despite starting well. So that is one area where we can improve,” said Tamim.

“In ODIs, we have to improve constantly to qualify for the World Cup. Now we have a lot of games abroad and it is always difficult to do well in foreign conditions. So we must make sure that everything is in place before an international match,” he added.