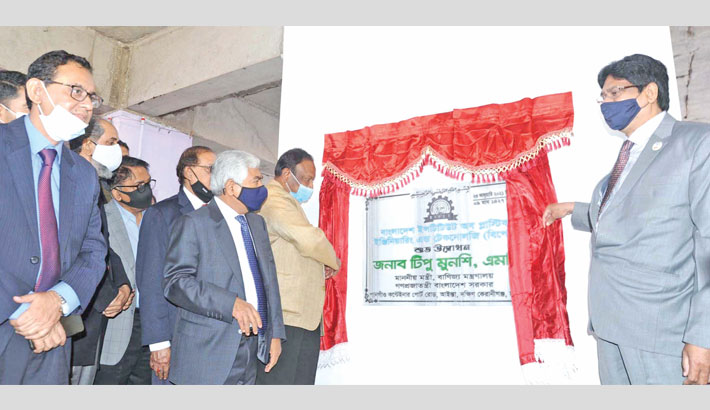 Commerce Minister Tipu Munshi has called for improving quality and design of local plastic goods and gaining more skills for that to enhance the items’ export.

“Plastic is a potential sector of the country that has a vast market as its demand is growing day by day. The market has to be tapped with product quality, design and skills,” Tipu Munshi said on Saturday.

He was addressing the inaugural event of a new campus of Bangladesh Institute of Plastic Engineering and Technology (BIPET) at Pangaon, Keraniganj, at the outskirts of Dhaka.

“We’ve the opportunity that should be tapped. We’ve to be prepared for that. The Prime Minster is providing support to the industry. Similarly, businessmen have to come forward as well,” Tipu Munshi noted.

He said there is no alternative to achieving skills for surviving in a very competitive market. The minister call upon all to perform their duty to turn local plastic goods into important exportable items like RMG.

Referring to LDC graduation, the commerce minister stated that a bright future is awaiting for Bangladesh after the graduation, but competence and skills would be the key to capitalising that.

For enhancing trade after the graduation, the government is trying to sign preferential trade arrangement (PTA) with some countries, he informed.

A deal has already signed with Bhutan and a PTA deal is expected to be signed soon with Nepal, while the government is in negotiation with some other countries for such deals, Tipu Munshi added.

“Primarily such deals seem to be not-profitable, but in the long run those can be profitable. For this, we’ve to do hard work,” the minister said in defence of the bilateral trade arrangements.