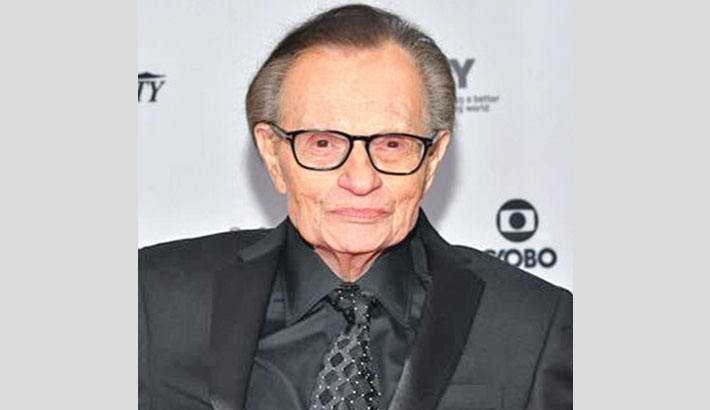 LOS ANGELES: The iconic talk show host Larry King, one of the most recognizable figures on US television as he quizzed everyone who was anyone over a career spanning 60 years, died on Saturday at the age of 87, reports AFP.

The company he co-founded, Ora Media, did not state a cause of death but media reports said King had been battling Covid-19 for weeks and had suffered several health problems in recent years.

King, with his trademark suspenders, black rim glasses and deep voice, was best known for a 25-year run as a talk show host on CNN’s “Larry King Live.”

“For 63 years and across the platforms of radio, television and digital media, Larry’s many thousands of interviews, awards, and global acclaim stand as a testament to his unique and lasting talent as a broadcaster,” Ora Media said in a statement posted on Twitter.

King’s long list of interviewees ranged from every US president since 1974, world leaders Yasser Arafat and Vladimir Putin, and celebrities such as Frank Sinatra, Marlon Brando and Barbra Streisand.

In an emotional last “Larry King Live” show in 2010, tributes included one from President Barack Obama, who in a video message called King “one of the giants of broadcasting”.

Tributes from the media, politicians and Hollywood stars poured in, led by Putin, who hailed the interviewer’s “great professionalism and unquestioned journalistic authority,” according to the Kremlin.

Veteran CNN foreign correspondent Christiane Amanpour remembered King as “a giant of broadcasting and a master of the TV celebrity/statesman-woman interview.”