Wuhan marks one year since lockdown over corona 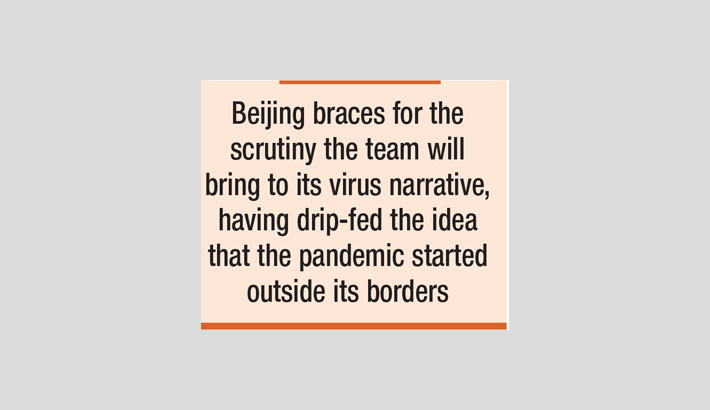 WUHAN: The Chinese city of Wuhan marked one year since the start of its traumatic 76-day coronavirus lockdown on Saturday while the pandemic continued to rage elsewhere, reports AFP.

Traffic hummed, sidewalks bustled, and citizens packed parks and public transport in Wuhan, underscoring the scale of the recovery in the metropolis of 11 million where the pathogen first emerged before going global.

The spread of the virus was accelerating elsewhere, with British Prime Minister Boris Johnson saying a new strain that emerged in the UK could be more deadly and more transmissible than the one that menaced Wuhan a year ago.

“In addition to spreading more quickly, it also now appears that there is some evidence that the new variant... may be associated with a higher degree of mortality,” Johnson told a news conference.

The sobering news came as Britain reported record deaths from Covid-19, following a surge in cases and hospitalisations since the variant was first identified in southeast England in September.

In the United States, the world’s worst-hit country, the new president gave his highest estimate yet of its eventual toll, as he stepped up federal aid.

Globally, the virus has killed more than two million people, infected tens of millions of others and hammered economies.

In Wuhan, a team of World Health Organization experts was still in hotel quarantine ahead of a mission to investigate the source of the virus, and the body said it was too early to conclude whether the pandemic actually started there.

“All hypotheses are on the table,” WHO emergencies director Michael Ryan told a press conference in Geneva. “And it is definitely too early to come to a conclusion of exactly where this virus started, either within or without China.”

Beijing is braced for the scrutiny the team will bring to its virus narrative, having drip-fed the idea that the pandemic started outside its borders.

And while Wuhanites looked back on their confinement from the distance of a year, Hong Kong was introducing its first lockdown of the pandemic, the government ordering thousands of residents to stay home as authorities battled an outbreak in one of its poorest and most densely packed districts.

The order bans anyone inside multiple housing blocks within the neighbourhood of Jordan—about 150 blocks and up to 9,000 people, according to local media—from leaving their apartment unless they can show a negative test.

Countries across the world were bringing in new measures Saturday, including the Netherlands, which was set to introduce its first curfew since World War II.

And in the Colombian capital of Bogota, residents were under their third weekend quarantine in a row, meaning the closure of all non-essential shops in the city of eight million from Friday at 8:00 pm until Monday at 4:00 am.

As vaccine rollouts gain pace around the world, Hungary announced it was going it alone and buying two million doses of Russia’s Sputnik V vaccine, frustrated by the European Union’s unwieldy strategy of buying shots in bulk on behalf of members.

“It doesn’t matter if the cat is black or white, as long as it catches the mouse,” Orban said of the different vaccines, despite wariness from some experts over Sputnik V being rolled out before large-scale clinical trials.

Brazil was meanwhile due to receive two million doses of a different jab developed by British pharmaceutical firm AstraZeneca and Oxford University.

The WHO has repeatedly warned that richer countries are hogging vaccines.

But there was good news Friday for poorer nations, as the WHO and pharmaceuticals giant Pfizer announced a deal for up to 40 million initial doses of the Pfizer-BioNTech vaccine to be made available to them through the Covax global pool.

“We can only end the pandemic anywhere if we end it everywhere,” said WHO chief Tedros Adhanom Ghebreyesus.

A separate deal, brokered by international agencies working with the WHO, will supply developing nations with tens of millions of rapid antigen tests at half the usual $5 price.