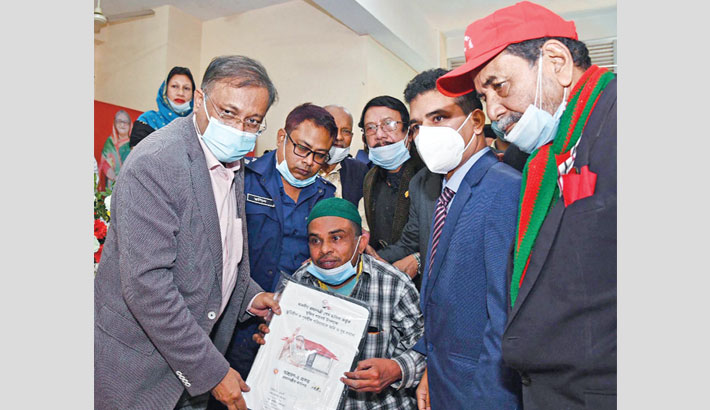 He was speaking as the chief guest at a function to hand over Prime Minister Sheikh Hasina’s gift houses with land at Rangunia Upazila Auditorium.

Saying that the housing problem still exists in the country, the minister said the Prime Minister has taken initiative to give houses to the homeless people in the Mujib Year and on the golden jubilee of independence.

He added that Sheikh Hasina has also announced that there will be no homeless people in the country.

“She is implementing her announcement today by handing over land and house documents to about 70,000 families in the country,” he said.

Earlier, the Prime Minister provided land and houses to the landless and homeless families on the occasion of Mujib Year from 10:30 am. The beneficiaries, government officials, public representatives and party leaders, including the Information Minister, enjoyed the program through video conference at Rangunia Upazila Auditorium.

“Prime Minister Sheikh Hasina has announced that she will make houses for the homeless people in the country in the Mujib Year. That announcement was not limited to just announcements. She has built thousands of houses using her state machinery and party. Today (Saturday), she has inaugurated about 70,000 houses only in one day,” Dr. Hasan said.

He said that those who got a house today had never thought of having a two-room house with land. Bangabandhu’s daughter Prime Minister Sheikh Hasina has done this unimaginable work for the homeless people of the country.

“I don’t know if any other country in the world has inaugurated houses for 70,000 families on a single day,” he added.

Dr. Hasan Mahmud said Bangladesh used to be a country of food shortage, but now it has become a food surplus country, which means “we have conquered hunger.”

He said that people are not seen in Bangladesh today wearing torn clothes and walking on bare feet.

Turning to those who got houses, the Information Minister said, “It is important to remember which government gave it. It was given by the AL government, the government bearing boat symbol, it should be kept in mind during all kinds of voting in the country,” he added.

Hasan Mahmud said that he would build at least 50 such houses in his constituency taking the financial support of himself and the other party leaders in response to the call of the Prime Minister.