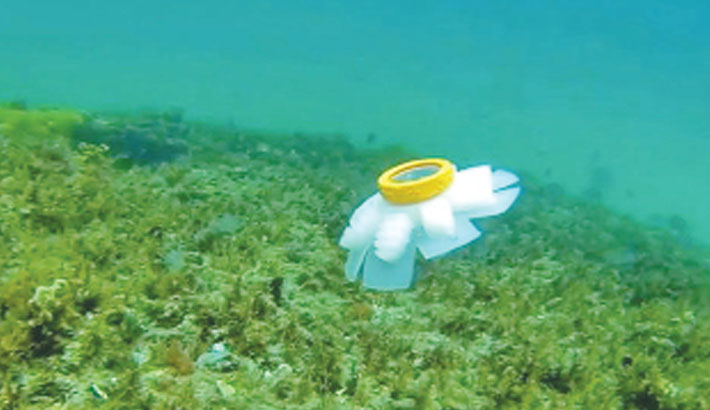 A robot inspired by the shape and delicate underwater movements of a jellyfish, allowing it to safely explore endangered coral reefs, was unveiled by British scientists on Wednesday, reports AFP.

According to research by teams at the universities of Southampton and Edinburgh and published in the journal Science Robotics, the small robot mimics “nature’s most efficient swimmer—the Aurelia aurita jellyfish”, more often referred to as the common jellyfish.

The experts decided to exploit the aspects of organisms like squid, jellyfish and octopus for a new tool in underwater exploration, said Francesco Giorgio-Serchi of from the University of Edinburgh.

“They are quite unique in that their lack of supportive skeletal structure does not prevent them from outstanding feats of swimming,” he said.

The robot, which constitutes a rubber head and eight tentacles, was created by a 3D printer and uses small but powerful water jets to propel itself based on a system of resonance.

The robot is the “first submersible to demonstrate the benefits of using resonance”, the researchers said.

Its self-propulsion system centres on a piston which strikes at the junction of the head and the tentacles.

When the piston hits at the ideal frequency—one which sets off the natural resonance of the components—the robot is able to generate large jets of water with very little energy.

Because of this technology, the jellyfish robot can propel itself in a way that is “ten to 50 times more efficient than typical small underwater vehicles powered by propellers”.

“This increased efficiency, combined with the additional benefits of the robot’s soft, flexible exterior would make it ideal for operating near sensitive environments such as coral reefs, archaeological sites or even in waters crowded with swimmers,” the statement said.

Because of these qualities the robot could replace divers in tasks too delicate for underwater vehicles such as the application of restorative substances to damaged corals.

While the new technology has been tested in tanks it yet to be used in real conditions in the ocean.

The University of Southampton wants to use the concept to assemble “a fully manoeuvrable and autonomous underwater vehicle capable of sensing and navigating its environment”.