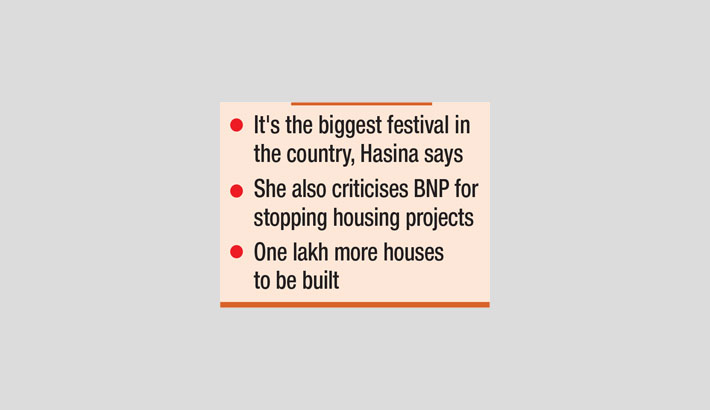 Prime Minister Sheikh Hasina is fulfilling the dreams of Bangabandhu Sheikh Mujibur Rahman as her government provided houses for 66,189 homeless and landless families across the country on Saturday under the Ashrayan-2 Project.

The premier inaugurated the house handover ceremony virtually from Ganabhaban in the capital. People from 492 upazilas of the country were connected with the ceremony.

She termed the distribution of the houses as the biggest festival of the countrymen in the Mujib Year.

“It’s the biggest festival today. There is no such big festival for the countrymen, like giving homes to the landless and homeless people,” she said.

Sheikh Hasina, also president of the ruling Awami League, directed the local administrations to hand over the ownerships of the houses to the beneficiaries.

Expressing her happiness for giving such a large number of houses to homeless people on a day of winter, the premier said the souls of Father of the Nation Bangabandhu Sheikh Mujibur Rahman and thousands of martyrs would rest in peace when the homeless families live in these houses.

It is because it was the desire of my father to make the people happy, she said. “I had a desire that I myself would hand over the land documents to people. But it is not possible due to the coronavirus pandemic,” she said.

“Yet, I can appear before you as the country has been digitalised,” Sheikh Hasina she added. The premier said her government had been working for every class with a view to managing shelter for all to lead a standard life. “We have set a target in the Mujib Barsho that not a single person will remain without address or home. I will somehow manage an address for everyone,’’ she said.

She further said as many as 320,000 families were earlier given homes and work on building one lakh more houses for the homeless and landless people will start soon.

The premier thanked all concerned, including the local administrations and public representatives, for managing building off the large number of houses maintaining due standard in a short period.

Sheikh Hasina urged all to pray for her so that she could build the country as a “Sonar Bangladesh” as dreamt by the Father of the Nation, saying, “My only target is to ensure a beautiful and improved life to everyone and Bangalee can move across the globe with dignity, keeping their heads high.”

Referring to giving homes to the backward people in the societies such as dalits, horijons, transgender, tea workers, the premier said her government had been tirelessly working to ensure improved live for a cross-section of the people in the society.

She said they have also rehabilitated the climate refugees with giving homes at Khuruskul in Cox’s Bazar while 100 more buildings are being built for them. The prime minister criticised the BNP-Jamaat government for stopping the housing projects undertaken by the Awami League-led government in 1997 to rehabilitate the landless and homeless people.

Ziaur Rahman had also stopped the rehabilitation of the people under the “Guchchho Gram” project taken by Father of the Nation Bangabandhu Sheikh Mujibur Rahman immediately after his (Bangabandhu’s) assassination along with most of his family members, she said. She said Ziaur Rahman had created an elite section in the society aimed at hanging on to power in the name of giving democracy and deprived the commoners. Corruption took an institutional shape and the electoral system was damaged totally in the Zia’s regime, she added.

Terming the five-year tenure of Khaleda Zia’s government and the caretaker government from 2001 to 2008 as a black chapter for Bangladesh, she said terrorism and militancy rose at that time. Forming the government in 2009 after voted to power, the premier said, they again initiated the Ashrayan Project to rehabilitate the landless and homeless people as her only target was to bring smiles on the faces of the countrymen as Bangabandhu wanted to change lot the people with improved lives for which he struggled for 24 years.

A video documentary was screened on the government’s effort to rehabilitate the landless and homeless people.

PMO Secretary Md Tofazzel Hossain Miah moderated the function from the Ganabhaban end. While exchanging greetings, Sheikh Hasina urged all the countrymen to find out the homeless and landless people in their respective localities as the government has a target to provide homes to everyone, marking the Mujib Barsho and the Golden Jubilee of the country’s independence.

The government has built 66,189 houses at a cost of Tk 1,168 crore for homeless people on the occasion of the Mujib Barsho. Each of the houses was built on two decimals of land having two rooms, one corridor and one latrine alongside connection of electricity and water.

The inmates of the houses will be given necessary training to ensure their earnings and after completion of the training they will get a loan from the government.

Besides, the Ashrayan Project under the Prime Minister’s Office (PMO) rehabilitated 3,715 families by constructing 743 barracks under 44 project villages in 36 upazilas in 21 districts during the Mujib Year.

The Ashrayan Project has prepared a list of 885,622 families in 2020, including 293,361 landless and homeless families, and 592,261 families having 1-10 decimal land but no housing facility. During the ceremony, four beneficiaries, being connected from separate places, talked to the premier and expressed their gratitude.

Parvin was first connected from Dumuria under Khulna district. She thanked the premier for getting a concrete-made house. “Honourbale Prime Minister, you have given us houses. May Allah live you long! We all pray for you,” said Parvin in an emotion-choked voice. Seeing her crying, the premier requested her not to do so. “Being the Prime Minister, I want to fulfil the long-cherished dream of Father of the Nation Bangabandhu Sheikh Mujibur Rahman. I want to work for the countrymen. That’s why I have dedicated myself,” she said, adding that her government would take a measure so that not a single individual would remain homeless.

The premier urged all the beneficiaries to plant at least a tree in front of their houses.

Sheikh Hasina then talked with the people at Syedpur upazila under Nilphamari and asked them whether they are happy or not after getting houses.

“We are very very happy. I along with my husband and children used to live in a house, owned by someone else. I have been spending a tough time. But now the daughter of Bangabandhu has given us a house and piece of land. Praying to Allah so that you may live long and continue to do better for the country,” said Aklima.

Being connected from Chunarighat of Habiganj, Nuru Mia said, “You have given me a concrete-made house along with a piece of two-decimal land. I am praying to Allah so that you may live long and help the poor.” The premier later joined Sallagram of Baliakandi union under Chapainawabganj.