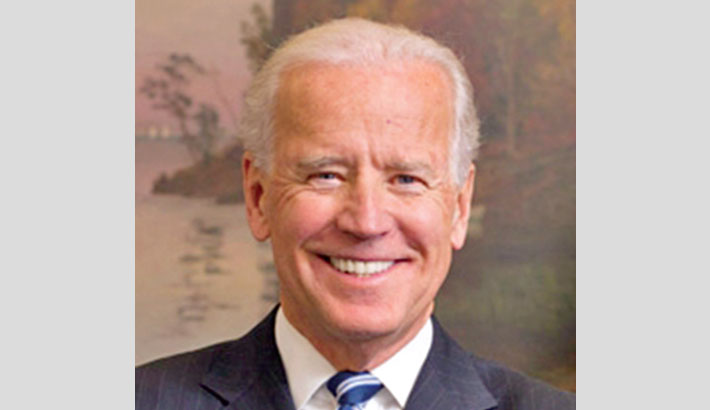 WASHINGTON: President Joe Biden is ordering an expansion of government benefits for hungry Americans, after the coronavirus pandemic ignited the worst hunger crisis the United States has seen in modern times, reports AFP.

The decree, one of two executive orders the White House said he will sign Friday, is modest and far short of the actions the president has called for from Congress.

Nonetheless, it represents one of Biden's first actions since taking office on Wednesday aimed at reviving the world's largest economy, after Covid-19 caused mass layoffs beginning last year that have left many people scrambling to pay the bills.

"The American people can't afford to wait. And so many are hanging by a thread, they need help, and we are committed to doing everything we can to provide that help as quickly as possible," said Brian Deese, director of the White House's National Economic Council Director.

Biden's main initiative to turn the economy around is a $1.9 trillion "rescue" package that he outlined last week, followed by a promised proposal aimed at fueling job creation and spurring hiring.

"Much, much more is needed. And so that's why, as we take these actions, we will continue to engage with Congress and with the American people around the need to move on the American rescue plan," Deese told reporters.

The orders also instruct government agencies to help people more quickly access federal stimulus payments, allow workers to leave jobs that could jeopardize their health, and expand protections for federal workers, while laying the groundwork for a minimum wage increase for federal contractors.

The Labor Department reported more than 1.3 million new applications for unemployment were filed last week, and as of the first week of January nearly 16 million people were still receiving some form of government jobless benefits.

Amid the widespread joblessness many families are struggling to pay for groceries: the Commerce Department reported in mid-December that 13.7 percent of adults lived in households where they sometimes or often did not have enough to eat.

And millions of children rely on meals from schools, which have been forced to close or modify their schedules during the pandemic.

The government last year offered families food aid equivalent to what their children would be getting at school.

Biden's order expands that by15 percent, which the White House said would give a family with three children more than $100 extra every two months.

The president order also instructs the Agriculture Department to issue guidance that would allow states to expand food aid to an additional 12 million people, and reevaluate its basis for determining benefits, according to the White House.

Meanwhile, the US president also embarked on a "wartime undertaking" to battle the pandemic in the world's worst-hit country.

On his first day in office Thursday, Biden signed a flurry of executive orders, including mask-wearing and quarantining requirements, and reversed predecessor Donald Trump's decision to quit the World Health Organization (WHO).

He tightened mask wearing rules and ordered quarantine for people flying into the United States, as he got to work on tackling the coronavirus pandemic on his first full day in power.

"We're in a national emergency. It's time we treated it like one," he said, adding that he wants to restore public trust in the wake of the divisive Donald Trump era.

Scientists, he said, will "work free from political interference" under his administration, and he pledged: "We will level with you when we make a mistake."

In addition to needing a negative Covid test result before flying, travelers to the US will now need to quarantine upon arrival, Biden said. This toughened existing regulations under Trump.

Wearing masks "has become a partisan issue, unfortunately, but it's a patriotic act," Biden said, in a marked contrast to Trump, who for months gave mixed messages about whether or not to encourage the practice.

Although vaccines were produced at a blistering speed in Trump's final year in power, the rollout has been chaotic.

"What we're inheriting is so much worse than we could have imagined," Jeff Zients, the new White House Covid-19 response coordinator, told reporters.

Biden has announced a goal of 100 million vaccines administered in 100 days, with his top experts saying it remains possible. So far, only 16.5 million doses have been injected.

When asked Thursday if he had been ambitious enough, Biden shot back: "When I announced it, you all said it's not possible. Come on, give me a break, man."

Biden said the administration was expanding places where Americans will be able to get their doses, with new community centers and extra medical staff to administer the vaccine.

He has also restored top infectious diseases doctor Anthony Fauci to a leading, visible advisory role in the White House, after Trump complained about the expert's warnings on Covid.

Fauci, a regular presence in the White House before being effectively banished, was back in the briefing room Thursday -- also pushing the message that public trust should be rebuilt.

"One of the things we're going to do is to be completely transparent, open and honest if things go wrong," he said, noting he had discussed this with Biden minutes earlier.

"The idea that you can get up here and talk about what you know... it is somewhat of a liberating feeling," Fauci said.

The pandemic has overshadowed the Biden administration from its first moments.

Only a few spectators were allowed to attend his swearing-in on Wednesday and everyone, from the military band to his wife Jill, looked on from behind face masks.

Biden and his vice president, Kamala Harris, began their day on Thursday by participating in a traditional inaugural prayer service which also had to be conducted virtually, because of the coronavirus.

The flood of executive orders and other directives which Biden began signing immediately on Wednesday has likewise focused mostly on his new national mask and vaccination strategy.

In addition, he is bringing major firepower to trying to get a massive stimulus bill through Congress to help Americans.

He faces multiple other challenges, including the aftershocks of a giant government computer hack blamed on Russia, and searing Trump-era political tensions -- an issue that could soon take center stage in a Senate impeachment trial of the ex-president.

Other fronts that Biden has opened include new protections for so-called "Dreamers" -- children of illegal immigrants who have now grown up in the country and had been shielded from deportation.

Yet another big blast at his predecessor's record was to immediately put the United States back into the Paris climate accord.