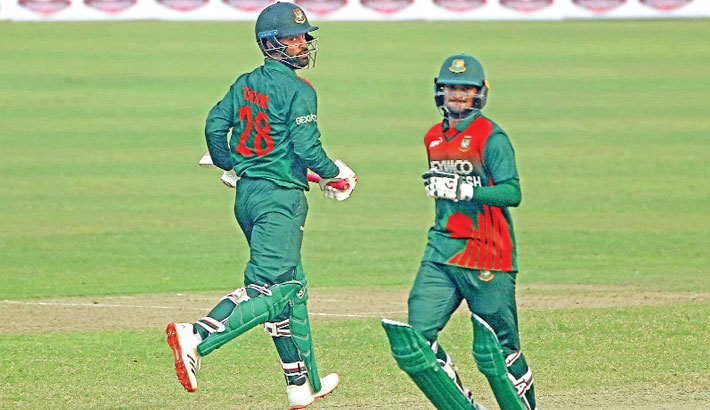 Bangladesh batsmen Tamim Iqbal, left, and Shakib Al Hasan run between the wicket during their second ODI against West Indies at Sher-e-Bangla National Cricket Stadium in the capital on Friday. – Reaz Ahmed Sumon

Bangladesh comfortably clinched the three-match ODI series against West Indies with one game to spare beating the visitors by seven wickets in the second match at Sher-e-Bangla National Cricket Stadium in Dhaka on Friday.

In pursuit of 149 runs for win, the Tigers easily reached the target in 33.2 overs losing three wickets.

Skipper Tamim Iqbal continued his wonderful batting composure, hitting 50 runs off 76 deliveries while Shakib struck unbeaten 43 from 50 balls to go past the visitors.

This is also Tigers’ third successive ODI series win over the Caribbean side.

Bangladesh earlier sealed two ODI series -- one home and the other away -- against West Indies in 2018. Both the series consisted of three one-day internationals and the Tigers won both of them by a 2-1 margin.

Friday’s victory was also Bangladesh’s seventh consecutive ODI win over the Caribbean side.

Earlier, off-spinner Mehidy Hasan Miraz set the stage for Bangladesh’s big win claiming career-best 4-25 while the experienced duo -- Shakib Al Hasan and Mustafizur Rahman -- chipped in with two wickets each as the visitors were bundled out for 148 runs in 43.4 overs after they opted to bat first.

West Indies who struggled to find their feet in the previous match with a weak batting line-up showed the same performance in the second ODI as they lost half of their side just at 41 in 17.4 overs.

Mustafizur removed opener Sunil Ambris (six) like he did in the previous match while Mehidy, who had a lot of things at stake before the series, dismissed debutant Kjorn Ottley (24) and Joshua Da Silva (five) in the same over.

Mehidy was later adjudged the man of the match.

Shakib then bowled Andre McCarthy out for three while West Indies’ top-scorer in the previous match Kyle Mayers was victim of a run-out for a duck while trying to take a foolish single.

West Indies continued to lose wickets at regular intervals and at one stage, they were tattering at 88-8 and were finding it hard to go past the 100-run mark.

However, Rovman Powell struck highest 41 runs off 66 balls while Nkrumah Bonner and Alzarri Joseph contributed 20 and 17 runs respectively at the lower order that helped them go past their first match’s total, although it was not enough to defend.

“We didn’t put together big partnerships, so individuals didn’t put up big scores. The guys are capable and hopefully we can put that right in the last match,” West Indies skipper Jason Mohammed said after the match.

Caribbean young sensation Akeal Hosein trapped Liton Das (22) in front in the sixth over but despite that it was a too easy chase for the Tigers as they notched another comprehensive win to go 2-0 up in the series.

The dead-rubber third and final match will be played at Zahur Ahmed Chowdhury Stadium in Chattogram on January 25.