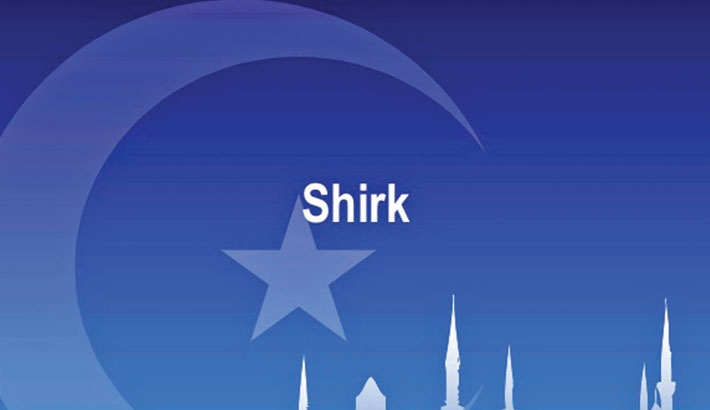 From that which has been established in the shariah (prescribed law) is that mankind was, in the beginning, a single nation upon true Tawheed; then shirk (directing any part or form of worship, or anything else that is solely the right of Allah, to other than Allah) gradually overcame them. The basis for this is the saying of Allah Almighty: “Mankind was one Ummah, then Allah sent prophets bringing good news and warnings.” (Qur’an, 2:213)

Ibn Abbas (may Allah bless him) said: “Between Nuh (Noah) and Adam were 10 generations, all of them were upon shariah of the truth, then they differed. So Allah sent prophets as bringers of good news and as warners”(Tahdheerus-Sajid min Ittikhadhil-Quburi Masajid)

Ibn Urwah Al-Hanbali (d.837 H) said: “This saying refutes those historians from the People of the Book who claim that Qabil (Cain) and his sons were fire-worshippers.” (Ibn Jarir At-Tabari in his tafseer and Al-Hakim said: “It is authentic according to the criterion of Al-Bukhari”)

In it is also a refutation of some of the philosophers and atheists who claim that the (natural) basis of man is shirk and that tawhid evolved in man! The preceding ayah (verse) falsifies this claim, as do the two following authentic Hadith: The Prophet (peace be upon him) related from Allah Almighty: “I created all my servants upon the true religion (upon tawhid, free from shirk). Then the devils came to them and led them astray from their true religion. They made unlawful to people that which I had made lawful for them, and they commanded them to associate in worship with Me, that which I had sent down no authority.”

The Prophet (peace be upon him) said: “Every child is born upon the Fitrah (Muslim/Ahmad) but his parents make him a Jew or a Christian or a magian. It is like the way an animal gives birth to a natural offspring. have you noticed any born mutilated, before you mutilate them.”

Abu Hurayrah said: “Recite if you wish: ‘Allah’s fitrah with which He created mankind. There is to be no change to the creation (religion) of Allah.” (Qur’an, 30:30)

After this clear explanation, it is of the upmost importance for Muslims to know how shirk spread among the believers, after they were muwahhidin (people upon tawhid).

Allah Almighty says about the people of Nuh: “And they have said: You shall not forsake your gods, nor shall you forsake Wadd, nor Suwa, nor Yaghuth, nor Yauq, nor Nasr.”

It has been related by a group from the salaf (pious predecessors), in many narrations, that these five deities were righteous worshippers. However, when they died, shaitan (Satan) whispered into their people to retreat and sit at their graves. Then Satan whispered to those who came after them that they should take them as idols, beautifying to them the idea that you will be reminded of them and thereby follow them in righteous conduct. Then Satan suggested to the third generation that they should worship these idols besides Allah, the most high, and he whispered to them that this is what their forefathers used to do!

So Allah Almighty sent to them Nuh (peace be upon him), commanding them to worship Allah alone. However none responded to His call except a few. Allah, the mighty and majestic, related this whole incident in Chapter Nuh.

Ibn Abbas relates: “Indeed these five names of righteous men from the people of Nuh (peace be upon him). When they died shaitan whispered to their people to make statues of them and to place these statues in their places of gathering as a reminder of them, so they did this.

However, none from among them worshipped these statues, until when they died and the purpose of the statues was forgotten. Then (the next generation) began to worship them.”(Al-Bukhari/Muslim)

The likes of this has also been related by Ibn Jarir At-Tabari and others, from a number of the salaf (may Allah bless them all).

In Ad-Durral-Manthoor, Abdullah ibn Humaid relates from Abu Muttahar, who said: Yazeed ibn Al-Muhallab was mentioned to Abu Jaafar Al-Baqir (d.11H), so he said: He was killed at the place where another besides Allah was first worshipped.

Then he mentioned Wadd and said: “Wadd was a Muslim who was loved by his people. When he died, the people began to gather around his grave in the land of Babil (Babel), lamenting and mourning. So when Iblis (Satan) saw them mourning and lamenting over him, he took the form of a man and came to them, saying: ‘I see that you are mourning and lamenting over him. So why don’t you make a picture of him (i.e. a statue) and place it in your places of gatherings so that you maybe reminded of him.’ So they said: ‘Yes, and they made a picture of him and put in their place of gathering; which reminded them of him’.”

When Iblis saw how they were (excessively) remembering him, he said : “Why doesn’t every man among you make a similar picture to keep in your own houses, so that you can be (constantly) reminded of him.”

So they all said “yes.” So each household made a picture of him, which they adored and venerated and which constantly reminded them of him.

Abu Jaafar said: “Those from the later generation saw what the (previous generation) had done and considered that to the extent that they took him as an ilah (deity) to be worshipped besides Allah Almighty. He then said: “This was the first idol worshipped other than Allah, and they called this idol Wadd.” (Al-Bukhari).

Thus the wisdom of Allah Almighty was fulfilled, when he sent Muhammad (peace be upon him) as the final Prophet and made his shariah the completion of all divinely prescribed laws, in that He prohibited all means and avenues by which people may fall into Shirk, which is the greatest of sins.

For this reason, building shrines over graves and intending to specifically travel to them, taking them as places of festivity and gathering and swearing an oath by the inmate of a grave, have all been prohibited.

All of these lead to excessiveness and lead to the worship of other than Allah Almighty. This being the case even more so in an age in which knowledge is diminishing, ignorance is increasing, there are few sincere advisers (to the truth) and shaitan is co-operating with men and jinn to misguide mankind and to take them away from the worship of Allah Almighty alone.