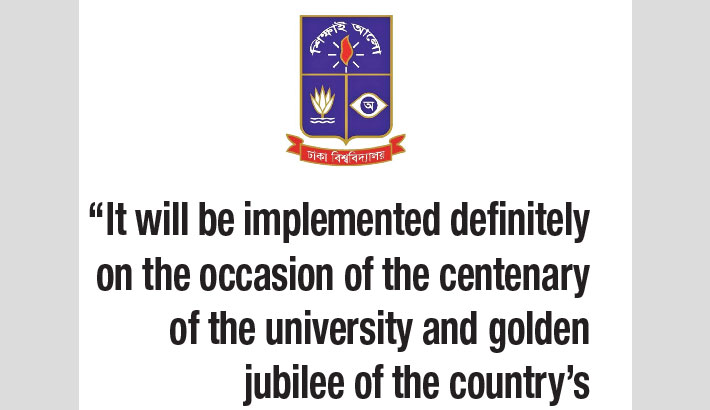 The demand for introduction of health insurance system from students of Dhaka University (DU) has become louder amid the Covid-19 pandemic.

The university which will celebrate its centenary this year remains closed since March last year due to the pandemic. Students and teachers said that the university authorities should introduce the health insurance system before the reopening of the university.

The number of DU students now stands at 37,018, most of whom are from middle class or lower middle class. When any students from such classes have any diseases, they find it difficult to bear the cost of treatment.

On some occasions, they have to encounter serious problems and go from door to door to raise money for treatment.

Talking to the Daily Sun, Arman Hossain, a third-year student of banking and insurance department of the university, said if students have health insurances, they will not have to pay much for treatment. The insurance company will stand by the students during their difficult periods of time, he added.

“Shariful Islam Shakil, former VP of Zia Hall Union, is such an example who could not receive proper treatment due to lack of sufficient amount of money during his illness. As a result, he died prematurely. If he’d had health coverage, his family would not have come across problems and raise money and he would have been able to recover," said Arman, also a resident student of Ziaur Rahman Hall.

“If health insurance is brought in on the occasion of the centenary of DU, it will be a valuable gift given by the DU authorities to the students.”

Earlier on June 2 last year, the DU administration at a meeting of the deans' committee decided to bring all its students under an affordable health insurance scheme.

A six-member committee was also formed to formulate a policy in this regard.

When asked about the development of their work, DU Treasurer Prof Mamtaz Uddin Ahmed, who is the convener of the body, said, “We held some meetings in this regard. The representatives of the insurance companies were also present there. Discussions are now going on as it’s a big deal.

“We need to understand what we are going to do. We have to work out a lot. Our last meeting was held about a month ago. It is now in the hands of director of accounts. He will formulate a draft policy and accordingly, we will finalize it at our next meeting.”

When asked if it is possible to introduce the insurance system by this year, Prof Mamtaz said, “It will be implemented definitely on the occasion of the centenary of the university and golden jubilee celebrations of the country.”

“The terms and conditions of health insurance should be set in such a way that the premium is the lowest and the benefits are the maximum.

There should be no bureaucratic complications and this should be ensured using digital technology.

"We hope that this health insurance will be introduced as quickly as possible.”