Mahmud can be the fastest: coaches 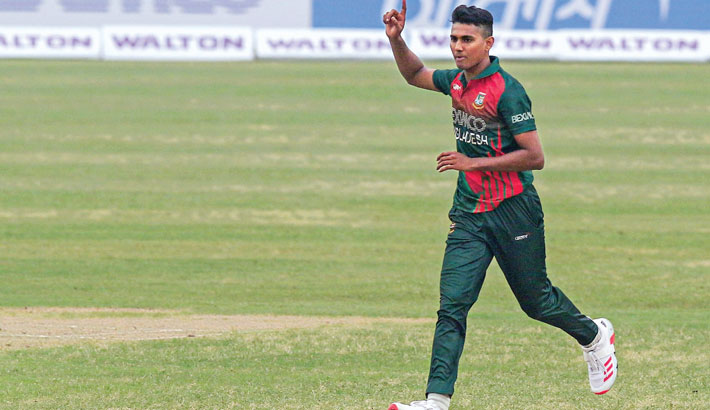 Bangladesh new pace bowling prodigy Hasan Mahmud has the ability to become the fastest bowler of the country, said coaches on Thursday.

The right-arm pacer grabbed three wickets on his debut against West Indies where he provided glimpses of his potentiality and coaches who worked with him believed he can be more lethal with passing days.

Bangladesh Cricket Board’s game development coach Mahbub Ali Zaki, who has worked with the Under-19 World Cup, told The Daily Sun that his action and ability to use the wrist make him different from others.

“He can be the fastest bowler of the country because he has a very smooth action while he generates pace off the pitch as he uses his wrist,” said Zaki.

“In the coming days, his muscle will be stronger and that will allow him to bowl even faster. What was impressive about him is that he seemed to have gotten over the injury that earlier halted his career progress,” he added.

According to cricket pundits, the young pacer can bowl at a speed of 140 kmph and has the rare ability to swing it both ways while in the recent past he added slower balls.

In the national nets, he looked to be one of the most impressive ones among the available pace options and certainly it paved his way into the national dressing room.

Mahmud was expected to be added to the national team following the Under-19 World Cup in 2018 in New Zealand but he was out for one and a half years due to an injury.

He got a team in BPL after playing well in the Emerging Asia Cup and SA games and was eventually rewarded with a spot in the T20I team where he made his debut last year.

“He didn’t surprise me at all, that’s why we picked him. We have seen the progress that he has made. He has been with us now probably for the last 12 months since Pakistan tour last year,” said Bangladesh’s pace-bowling coach Ottis Gibson.

“We have seen him develop nicely. So it was good that he got his opportunity. Three wickets in his debut is a good reward for the hard work that he has been putting in,” he added.