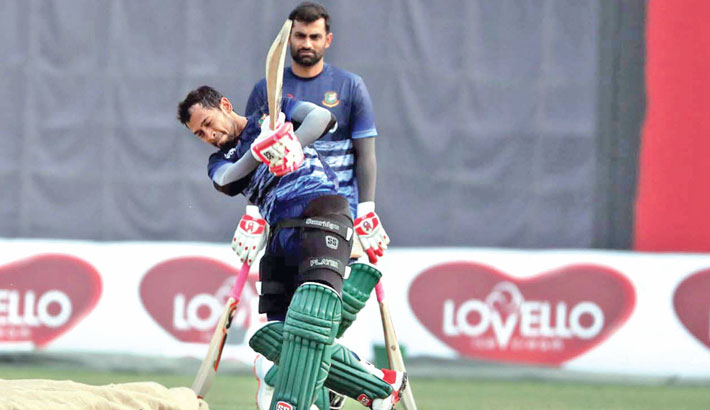 Bangladesh wicket-keeper batsman Mushfiqur Rahim plays a shot as captain Tamim Iqbal looks on during their practice session at the Sher-e-Bangla National Cricket Stadium in the capital on Thursday. — BCB Photo

Bangladesh look determined to make sure their batting-unit shine against West Indies as they prepare to wrap up the series against the visitors at the Sher-e-Bangla National Stadium today.

Tigers are currently leading the three-match series 1-0 after they beat West Indies by six wickets in the series opener on Wednesday.

However, chasing 122 runs the hosts lost four wickets and it forced most of the batsmen apart from Mahmudullah come in the optional practice session in Mirpur on Thursday.

Tamim Iqbal, Shakib Al Hasan and Mushfiqur Rahim were focused and want to make sure they are well prepared before the game knowing that a win would help them earning the third successive series win over West Indies.

Bangladesh couldn't have made a better return to international cricket when they completed a six-wicket win and more than the victory, the hosts pleased with the performance of their star all-rounder Shakib, who enjoyed a fruitful outing in his comeback game after the ban.

Debutant Hasan Mahmud picked up three wickets while skipper Tamim Iqbal scored a vital 44 in the chase to kick-off his captaincy regime with a win.

With plenty of positives to take from the opening game, Bangladesh are clear favourites to inflict more damage in less than 48 hours against a side that looked quite lost with the bat.

Bangladesh pace bowling coach Ottis Gibson said that he was impressed with the way they played in the opening game adding that seeing pacer Mustafizur Rahman bring the ball into the right-handed batsman was pleasing.

“I think it was a good team performance. Conditions weren’t ideal. I guess the way the pitch spun but we had all bases covered with the team we had,” he said.

“I thought Fizz (Mustafizur) and Rubel (Hossain) bowled really well upfront and then Hasan Mahmud had a fantastic debut. It wasn’t an ideal performance but it was a good way to start, with a victory,” Gibson added.

The hosts aren’t keen on changing a winning combination. While they handed a debut to Mahmud, the other two uncapped players – Mahedi Hasan and Shoriful Islam may have to wait a little longer until the series is wrapped up.

West Indies skipper Jason Mohammed has urged his batsmen to put up a better performance with the bat in order to stay alive in the series.

“We have to give ourselves a little bit more time. It is difficult to score in the middle-overs with the spinners so negotiating that part of the innings and it is going to be crucial for us. Obviously, we need to play that period of bowling a little better,” he said.

"Akeal was a standout on his debut. He took three crucial wickets for us. He was economical too,” he said.