Another Golden Chapter in Relations

Bangladesh receives 2m doses of vaccine from India as gift 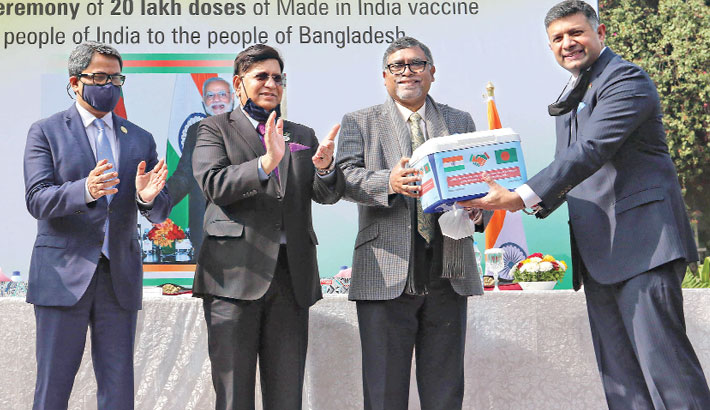 India formally gave 2 million doses of Covishield vaccine to Bangladesh as a "gift" on Thursday, scripting another golden chapter in their strong bilateral relations.

Bangladesh received the gift of the Covid-19 vaccine from its neighbouring country when the whole world is grappling to fight off the deadly disease and panic about getting access to the shot.

“This is an exceptional relation -- a relation tied by blood. This proves the true friendship between Bangladesh and India," Momen said.

Thanking the government and the people of India for gifting the vaccine, he said India stood by Bangladesh during the Liberation War in 1971, and today when the pandemic is rattling the world, India again came with a gift of vaccine.

Momen also said the arrival of the vaccine from India shows a sign of strong relations and a good will between Prime Minister Sheikh Hasina and her Indian counterpart Narendra Modi. “It’s a historic day. The two leaders have achieved such a goodwill and strong relations.”

After receiving the vaccine, Zahid Maleque termed the gift of the vaccine as a proof of the friendship between the neighbouring countries.

Speaking on the occasion, Doraiswami said that January 21 is a landmark day as the arrival of the vaccine for the very first time in Bangladesh will support the country’s own efforts against Covid-19.

“India, as a committed partner of Bangladesh, is delighted to have been able to contribute to this historic moment.”

He said the gift was part of the country's neighbourhood first policy under which India accords high priority to its relationship with Bangladesh.

The Indian envoy said the gift of 20 lakh doses of Covishield are, in fact, the biggest such dispatch by India to any of the neighbouring countries.

He further said that in line with the discussions held during the virtual summit between Prime Minister Narendra Modi and Prime Minister of Bangladesh Sheikh Hasina, India has delivered the vaccines within a week of the vaccine roll-out in the largest democracy.

He added that the arrival of the vaccine is only the latest of many steps already taken by the two countries to combat Covid-19 together.

Pointing out the earlier instances of cooperation in the fight against coronavirus, Doraiswami said that on March 15, Prime Minister Narendra Modi convened a meeting of SAARC leaders through videoconferencing for combating the pandemic through a cooperative approach.

Following the meeting, the SAARC Covid-19 emergency fund was set up. Several programmes for capacity building have also been conducted for healthcare professionals, administrators and others during this period.

The Indian high commissioner recalled that the Bangla-language course on Covid-19 organised by AIIMS, Bhubaneswar especially for healthcare professionals from Bangladesh was a resounding success. A two-day online "Train the Trainer" course was also conducted by the Government of India on 19-20 January 2021 to facilitate the vaccine roll-out.

The consignment which consists of Covishield vaccine (the Oxford-Astrazeneca vaccine) has been produced in Pune, India by the Serum Institute and purchased by the government of India from its own quota for gifting purposes.

"We’re very happy that 20 lakh doses of Covid-19 vaccine have arrived here. India helped us during the Liberation War of Bangladesh and now they are helping us again during the pandemic," Zahid Maleque said at the vaccine handover ceremony at Padma.

He also said the vaccine has proved the true friendship between Bangladesh and India and vowed to fight against any disaster together.

The health minister also requested the Indian government to implement the deal for 3 crore vaccine doses soon. "We will have 70 lakh doses of the vaccine in our stock this month," he added.

The consignment of two million doses of the Oxford-AstraZeneca vaccine, gifted by India, arrived at Hazrat Shahjalal International Airport in Dhaka by an Air India aircraft cargo around 11:20am.

The aircraft displayed a banner which was inscribed with “We are proud to be associated with the carriage of vaccines on Air India Charter Flight AI 1232 Mumbai to Dhaka.”

“Touchdown in Dhaka. VaccineMaitri reaffirms the highest priority accorded by India to relations with Bangladesh,” External Affairs Minister of India S Jaishankar tweeted at 11:40am.