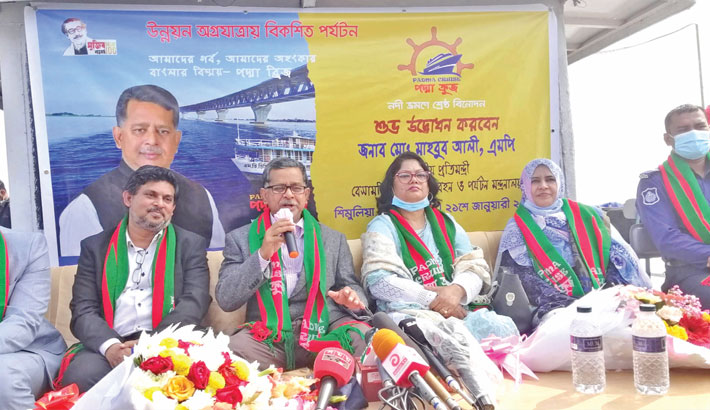 State Minister for Civil Aviation and Tourism Mahbub Ali speaks at the inaugural ceremony of ‘Padma Cruise’ at Lauhajang in Munshiganj on Thursday.

He made the remark while speaking as the chief guest at the inauguration of journey by boat titled ‘Padma Cruise’, organised by Dhaka Cruise and Logistics, at Shimulia Ghat in Munshiganj.

“We have met the MDGs ahead of schedule, next lie the SDGs…The tourism industry will play a vital role in meeting the targets of this SDG,” he said. “We hope that our tourism industry, Ministry of Tourism, Bangladesh Tourism Board and Bangladesh Tourism Corporation under the leadership of the Prime Minister Sheikh Hasina people will play a unique role in projecting Bangabandhu’s desired ‘Sonar Bangla’ to the world,” he added. Mahbub said, “There is a possibility of creating a river tourism spot at Shimulia Ghat. The inauguration of the ‘Padma Cruise’ marked the beginning of the river tourism, just within 41 days after the bridge’s full infrastructure was visible.” Stating that the initiative has been taken to expand river tourism on the occasion of Mujib Year, the state minister hoped that the immense potentiality of the sector will be brought out soon.

The ‘Padma Cruise’ started its journey with a double Decker named ‘MV Dingi’.

Up to 60 tourists can board this ship together. And 48 tourists will be able to ride at night with cabin facilities.

The cruise ensures safety life jackets, firefighting facilities and rescue boats for the passengers. The Ship is currently offering student, regular cruise and full-moon night packages. Every day, the ship will cruise for 3 hours in two phases starting from 10am-1pm and 2pm-5pm.