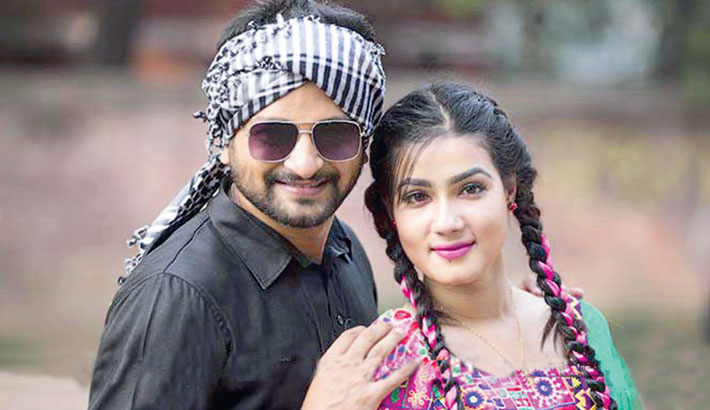 Symon Sadik and Mahiya Mahi are two popular film actors of the country. The duo has acted in several audience-acclaimed movies. Now, the viewers will see them acting in three films under the banner of production house Shapla Media. The films are ‘Gangstar’, ‘Live’ and ‘Narosundori’. The duo signed deal with the production house for the films on January 18.

Among the three films, Shahin Shomon is directing the film ‘Gangstar’ while Shamim Ahmed Rony is the director of ‘Live’ and ‘Narosundori’.

“My chemistry with Mahiya Mahi is amazing. She is a talented artiste. I hope we will present some good works to the audience.”

Symon Sadik and Mahiya Mahi is one of the popular pairs of Dhallywood. Earlier, the much-talked about duo teamed up for several popular films, including, ‘Poramon’ by Zakir Hossain Raju in 2013 and ‘Jannat’ by Mostafizur Rahman Manik in 2018. And their film ‘Ananda Ashru’ is waiting for its release date.

Symon Sadik made his debut as a lead in the 2012 in the film ‘Ji Hujur’ directed by Zakir Hossain Raju. He won Bioscope Borsho-sera awards for Best acting in ‘Poramon’. He also won Bangladesh National Film Award for Best Actor for his role in the film ‘Jannat’ (2018).

Mahiya Sharmin Akter Nipa, known by Mahiya Mahi, made her acting debut with the film ‘Bhalobashar Rong’ in 2012, opposite to another debutante Bappy Chowdhury. Bhalobashar Rong is referred as the first Bangladeshi digital cinema according to Jaaz Multimedia. The film was declared as a huge financial success. Her other popular films are ‘Onnorokom Bhalobasha’, ‘Poramon’, ‘Bhalobasha Aaj Kal’, ‘Tui Sudhu Amar’ and ‘Pobitro Bhalobasha’.