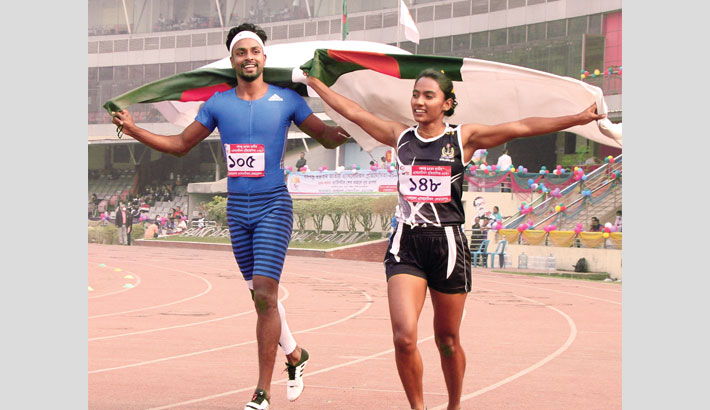 Navy athletes Shirin Akter and Jahir Raihan, who clinched the highest number of four gold medals each in the recently concluded Bangabandhu 44th National Athletics Competition 2021, are eyeing to bring success for Bangladesh in international events.

Both are expected to take part in some major international events such as - Tokyo Summer Olympics, 5th Islamic Solidarity Games and 19th Asian Games in upcoming days.

Bangladesh Olympics Association have already decided to send their contingent in all these events in some particular disciplines.

“We, athletes, always dream to represent Bangladesh in the international arena. I'm doing my best, improving my performances day by day,” Shirin told The Daily Sun in a recent interview.

“I believe I've proved my worth. I'm able to take part in major international events including the upcoming Olympics, Islamic Solidarity and Asian Games,” she added.

The 26-year old sprinter from Satkhira now secured her 11th consecutive title in the 100m at the national level.

“I worked hard and continued my practices during the COVID-19 break. I was at BKSP and didn't take any break. I'm happy with my timing and performances in the recently concluded national athletics. Now I will take a 10 to 11 days break and after returning from that, I will start practising for the upcoming Bangladesh Games,” Shirin added.

“Practice makes athletes perfect. It is key to all success. I've not ever stopped my practices. Even during this long COVID-19 break, I continued my practices to keep myself fit. My target is to take part in the Olympics so this meet was important to me. It was needed to show my best here so that I can perform in the Olympics,” Jahir said.

Jahir, who was expected to bring a gold medal for Bangladesh in the South Asian Games 2019 in Nepal, failed to participate in the final of the event owing to breathing problems and high pulse-rates due to the high altitude of Kathmandu.

The youngster said he wanted to compensate it by putting up his best performances in the Olympics and other major international events.

“It is a bad dream for me. I could have bagged a gold medal (SA Games). I don't want to think about the past. I'm looking forward to the upcoming competitions. My targets are major meets.

“I need better training for these. Bangladesh Games is also knocking at the door. I want to continue my performances at that event,” Jahir concluded.