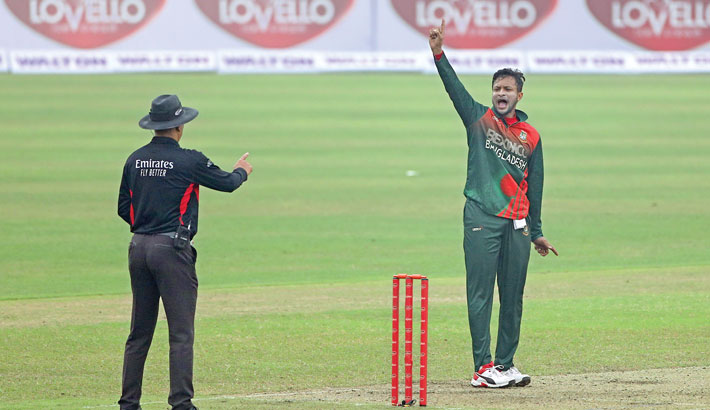 Bangladesh all-rounder Shakib Al Hasan makes an appeal for wicket during the first of three-match ODI series against West Indies at the Sher-e-Bangla National Stadium on Wednesday. —Sun photo

Bangladesh star all-rounder Shakib Al Hasan returned to international cricket with a superlative performance to help the hosts taking 1-0 lead against West Indies in the three-match ODI series in Dhaka on Wednesday.

Shakib starred with the ball in his international comeback after the one-year ban as Bangladesh beat West Indies by six wickets in the first ODI.

Shakib picked up 8-4 as Bangladesh bowled out West Indies for 122 in 32.2 over and later the home side reached 125-4 in 33.5 overs to complete the win with skipper Tamim Iqbal scored 44 runs to taste the first ODI victory as a leader.

There was festive mood all around though there was no noise since no fans were allowed inside the stadium as part of corona precaution.

Shakib’s dominance was not surprising considering the fact he returned with a bang in the previous two occasions when he was banned by Bangladesh Cricket Board for six months and three matches respectively. But there was certainly doubt in the minds considering he did not have a good time in Bangabandhu T20 Cup through which he returned to competitive cricket.

Shakib said that he was never worried about his form in domestic cricket.

“I don't count all the domestic games I played. Outside the dressing room, people may think about it but I don't think about it,” man-of-the-match Shakib said after the match.

“Playing after 16-17 months is not easy. But happy with the way I performed. The thing is we haven't played for 10 months. Everyone was excited and keen to play matches.

“Everyone was nervous today but also very excited. (But we) Keep it simple, just pitch the ball in the right areas and hope for the wicket to do the rest,” he added.

Shakib hardly looked anxious despite the fact he was well aware that all the spotlights were on him during the match between two lower-ranked teams.

Shakib, who picked four scalps, ended with the best figures by a Bangladesh bowler against West Indies in the ODIs.

Shakib, who was playing his 100th games at home, also wrote his name in the history as he surpassed Waqar Younis and just seven wickets shy of Wasim Akram to become highest wicket-taker in a single venue.

Shakib said that he is not worried about his new batting position as he is demoted down the order by the team management.

“Whether I like it or not (batting down the order), it’s a team decision and I respect it because for me team is everything,” said Shakib.

“I think whether I do bad or good is written on the fate but one player can only try and I am only willing to do that,” he added.