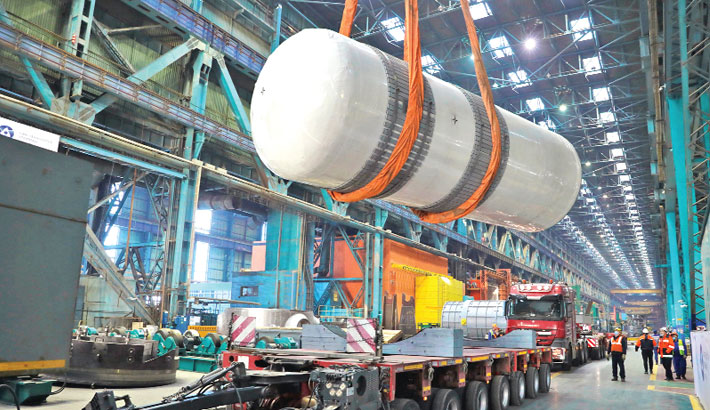 The Volgodonsk Branch of JSC AEM-technology, part of the machine-building division of Rosatom – Atomenergomash, manufactured and shipped the internals of the nuclear reactor for the first power unit of the Rooppur Nuclear Power Plant (NPP).

The Internals include an 11-meter Core Barrel, Core Baffle and Protective Tubes Unit. The total weight of the Internals is over 210 tonnes, said a release.

From the site of the Volgodonsk branch, the equipment was shipped by road to the port in Novorossiysk, and then the items will be shipped by water to the nuclear power plant in the Republic of Bangladesh. The waterway will be about 14,000 km.

The reactor is a vertical cylindrical vessel with an elliptical bottom, inside which the core and internals are located.

The top of the reactor is hermetically sealed with a cover with drives of mechanisms and controls and protection of reactors installed on it and nozzles for outputting cables of in-reactor control sensors. The cover is mounted to the vessel with studs.

In the upper part of the vessel, there are nozzles for supplying and removing the coolant, as well as nozzles for emergency supply of the coolant when the circuit is depressurized.

The Rooppur NPP is being designed and constructed according to a Russian project. The plant will consist of two power units with VVER-1200 reactors, the life cycle of which is 60 years with the possibility of extending the service life for another 20 years.