Bangabandhu Satellite-2 to be launched in 2023 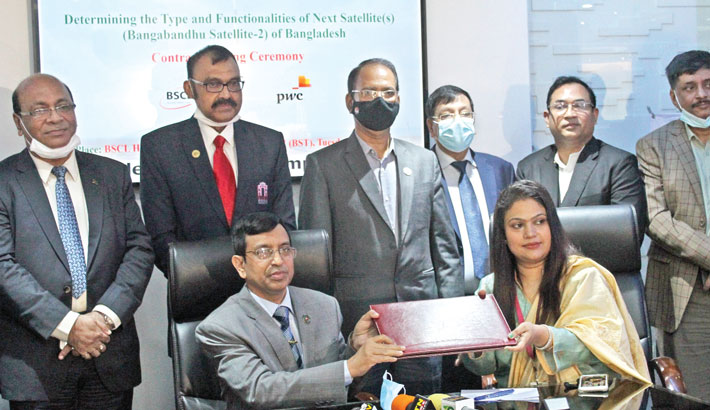 The government is expecting to launch the country’s second satellite- Bangabandhu Satellite-2-by 2023, a top official confirmed.

As part of the plan, Bangladesh Satellite Company Limited (BSCL) has signed an agreement with a France-based company, PricewaterhouseCoopers (PwC) Advisory, SAS for consultancy services to launch Bangabandhu Satellite-2.

Posts and Telecommunications Minister Mustafa Jabbar as the chief guest was present at the signing ceremony virtually.

“We are hoping to launch the second satellite by 2023….the satellite will be used for non-communication purposes specially for geological survey and weather forecasting,” BSCL Chairman Dr. Shahjahan Mahmood told the daily sun yesterday after attended the singing function.

He said that the company is expected to submit its recommendation within three months.

“We are hopeful to invite tender for launching the satellite within this year subject to approval of the Prime Minister,” he said.

The Bangabandhu Satellite-2satellite can be used for commercial purpose too, he added.

BSCL has already adopted an action plan to implement the announcement of the launching of the country's second satellite (Bangabandhu Satellite-2). Senior officials of both the organisations including members of the Board of Directors of BSCL, among others, were also present on the occasion.