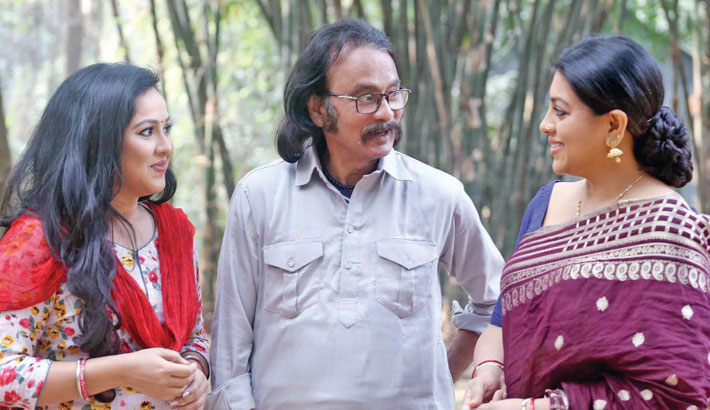 Salauddin Lavlu is a popular actor, screenwriter and television director of the country. In his 35-year career, he has directed many audience-acclaimed drama serials, including, ‘Ronger Manush’, ‘Vober Hat’, ‘Ghor Kutum’, ‘Alta Sundori’ and ‘Sakin Sarisuri’. Alongside directing, the talented artiste is now acting in drama and serials regularly.

Two popular artistes Tahmina Sultana Mou and Nadia Ahmed will also play two important roles in the serial.  Mou will be seen as Lavlu’s wife while Nadia will play his sister-in-Law in the drama.

Talking about the drama, Lavlu said, “The story of the serial is very nice. The audience will see me showing different excuses in the drama for my unwillingness to get my sister-in-laws’ married. I hope viewers will enjoy the serial very much.”

Mou said, “It is my first work under the direction of Faridul Hasan bhai. He has a well-equipped shooting unit. I’m enjoying the shooting.”

“Lavlu bhai is playing my husband in the drama. Earlier, I’ve worked under his direction. We are  trying our best to portray ourselves according to the character”, Mou added.

Nadia said, “Earlier, I’ve worked in the serial ‘Jamai Hajir’ under the direction of Faridul Hasan. He always makes good story-based dramas and his selection of artistes is also admirable. I hope the audience will accept the drama serial ‘Bahana’ like his previous dramas.”

The drama ‘Bahana’ will be aired on Rtv soon. Dr. Ejajul Islam, Faruk Ahmed, Siddikur Rahman, Irin Tani and others will also play roles in the serial, said Faridul Hasan.