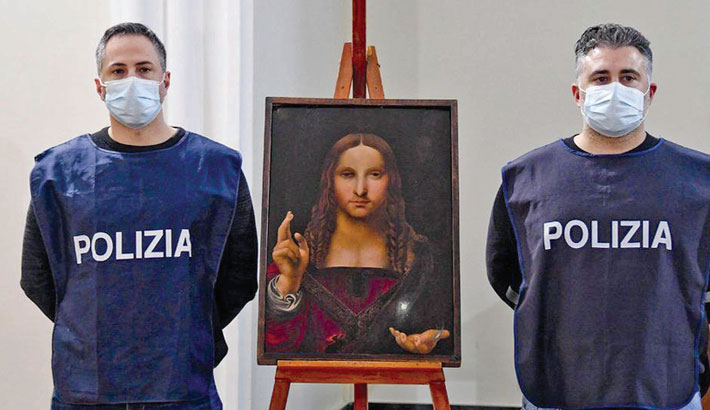 Italian police has found a 500-year-old copy of Leonardo da Vinci’s Salvator Mundi in a Naples flat and returned it to a museum that had no idea it had been stolen, reports AFP.

Officers said late Monday they had arrested the 36-year-old owner of the apartment on suspicion of receiving stolen goods, after the painting was found in his bedroom cupboard.

Depicting Jesus Christ with his hand raised in a blessing and holding a crystal orb, the painting is part of the Doma Museum collection at the San Domenico Maggiore church in Naples. It is a copy of Leonardo’s famous work that in 2017 became the most expensive painting ever sold, fetching $450 million at a Christie’s auction.

But the museum has been shut for months due to coronavirus restrictions and nobody had reported it missing.

“The painting was found on Saturday thanks to a brilliant and diligent police operation,” said Naples prosecutor Giovanni Melillo.

“There was no complaint on the matter and in fact we contacted the (church) prior, who was not aware of its disappearance, as the room where the painting is kept has not been open for three months.”

The oil painting is believed to be by artist Giacomo Alibrandi and dates to the early 1500s.