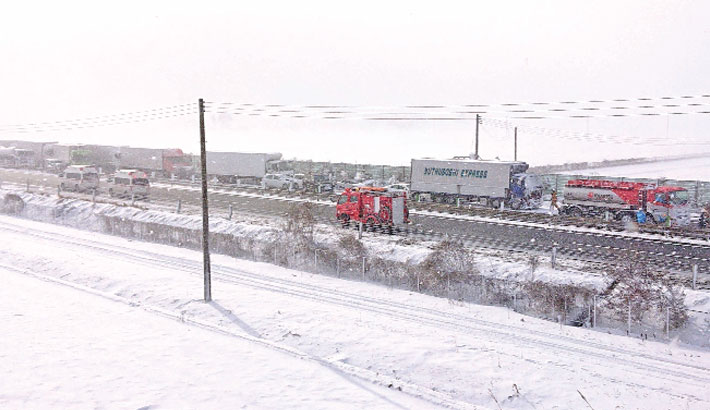 The photo taken and released on Tuesday by the East Nippon Expressway Company Limited shows the site of a traffic accident involving dozens of vehicles due to adverse weather conditions along the Tohoku Expressway in Osaki, Miyagi prefecture in Japan. – AFP PHOTO

TOKYO: At least 134 cars were involved in a series of crashes in Japan on Tuesday when a snow storm struck a stretch of highway and one person was killed and a dozen hurt in the chaos, report agencies.

The crashes occurred on the Tohoku Expressway in the northern prefecture of Miyagi at around noon, on a stretch of road about 1 km (half a mile) long, the government said.

Authorities had imposed a speed limit of 50 kph (31 mph) when heavy snow cut visibility but that was not enough to prevent disaster.

Some 200 people were caught up in the crashes with 12 of them were sent to hospital, the disaster management agency said.

Images from the expressway show the sheer scale of the pile-up.

Authorities had already enforced a 50km (31mile) speed limit on the road due to visibility.

There was a maximum wind speed of about 100km/h (62mph) at the time of the incident, local weather officials said.

Those who were involved have been given drinking water and food, and have been provided with blankets to keep warm, NHK News reports (in Japanese).

The snow has affected some of Japan’s high-speed railway network, with a number of train services in the Tohoku region cancelled.

According to local media, the region is expected to record up to 40cm (15 inches) of snow in the next 24 hours.

The country has been experiencing a large amount of snowfall this winter.

The weather was so bad that an emergency meeting was called and the country’s Prime Minister Yoshihide Suga called on members of the public to be cautious.