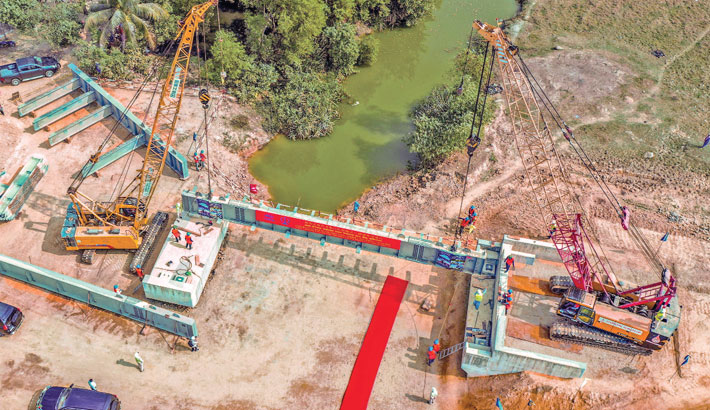 Construction work of Railway Station Building in Cox's Bazar under the Dohazari-Cox’s Bazar Railway project is going on in full swing. The project work is expected to be completed by December 2022. The snap was taken on Monday. —SUN photo

As part of the government plan to turn Cox's Bazar a world-class tourist destination, the authorities and construction companies have gone into overdrive to complete the Dohazari-Cox’s Bazar Railway Project by December 2022.

Official sources said the construction work of the project is progressing fast and is due to finish within the stipulated time. Travel-loving people will hopefully be able to go to Cox's Bazar from the capital by train next year, sources added.

"The country's tourism sector will see revolutionary changes once the railway service from Dhaka to Cox's Bazar starts," he said after laying the foundation stone of the iconic Railway Station Building in Cox's Bazar and launching the first steel girder for Bridge on January 14 and 15. The two projects are the milestones of Dohazari-Cox’s Bazar Railway scheme.

The six-storey Cox's Bazar Railway Station Building is being built at a cost of Tk 215 crore.

“I am confident and hopeful of completing this railway project by December 2022,” he said and highly praised the China Civil Engineering Construction Corporation (CCECC) and MAX Infrastructure Limited in Bangladesh for their ceaseless efforts to continue the construction work of the project.

The minister requested the contractor companies to overcome difficulties, including the Covid-19 pandemic, and further expedite their construction work for successful completion of the project in time.

Officials said the completion of this railway project will significantly improve the local economy and connectivity of transportation and attract tourists from not only Bangladesh but also from all over the World, said a press release of CCECC on Monday.