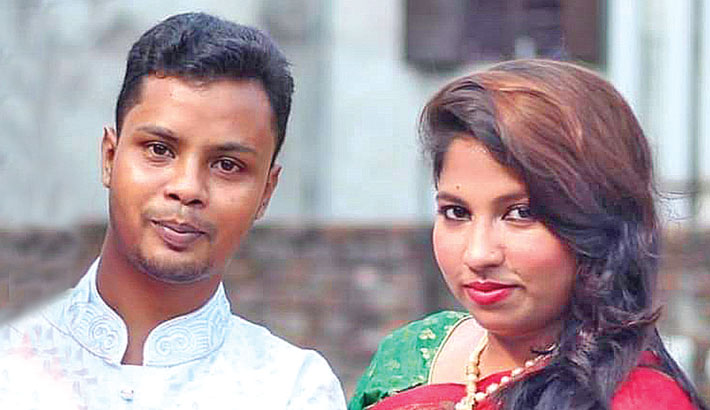 A young couple was killed in a road accident as a reckless bus hit their motorcycle on the busy Airport Road in the capital on Monday morning.

Their four-year-old daughter has been left orphaned after both her parents died in the fatal accident.

The deceased were identified as Akash Iqbal, 27,

and Maya Hazarika, 25, hailing from Faridpur Sadar. They lived at a rented house in Mollartek in Dakshinkhan of the capital. Mashiul Alam, a sub-inspector of Airport Police Station, told the Daily Sun that the couple riding on a motorcycle was moving towards Khilkhet from Dakshinkhan.

When they reached near Padma Oil Gate, a passenger bus of Ajmeri Glory Paribahan hit the motorbike from behind at about 7:15am, leaving the duo dead on the spot.

The bodies were sent to Dhaka Medical College Hospital (DMCH) morgue for autopsy.

He said they seized the bus but its driver and helper managed to flee the scene.

Police said the husband and wife wore sub-standard helmets that could not save their heads. Sheikh Idris, paternal uncle of Iqbal, told the Daily Sun that his nephew and his wife were living at a rented house at Mollartek in Dakshinkhan with their only daughter Abra, 4.

Iqbal was doing job at a private company while his wife Maya was doing a job at Hotel Lake Castle, he said.

Idris said Abra realised that her parents died and she was crying.