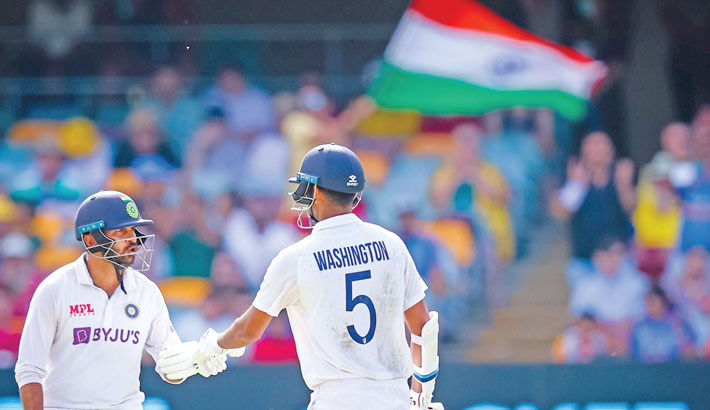 India all-rounder Washington Sundar, right, is congratulated by Shardul Thakur after reaching his half century during day three of their fourth Test against Australia at Gabba in Brisbane on Sunday. – AFP PHOTO

A pair of unlikely third-day batting heroes Sunday gave India a fighting chance of securing the draw they need in the fourth Test against Australia to retain the Border-Gavaskar Trophy.

Washington Sundar and Shardul Thakur, in just his second Test, put on 123 runs for the seventh wicket -- a record for India at the Gabba -- taking their team from a precarious 186 for seven to 309 before Thakur was bowled by Pat Cummins for an entertaining 67.

All-rounder Sundar, on debut, batted well with the tail until he guided a Mitchell Starc short ball to Cameron Green in the gully to fall for 62.

By the time Mohammad Siraj was bowled by Josh Hazlewood, giving him figures of 5-57, India had reached 336, only 33 runs behind Australia's first innings total of 369. Australian openers Marcus Harris and David Warner survived six testing overs as Australia finished the third day on 21 without loss, a lead of 54 runs with all 10 second innings wickets intact.

Without Sundar and Thakur, India would have been in far greater trouble against an Australia side who must win the match to regain the Border-Gavaskar Trophy with the four-match series locked at 1-1. The two smashed the previous seventh-wicket record for India at the Gabba of 58, set by Kapil Dev and Manoj Prabhakar in 1991. Thakur said he used some words coach Ravi Shastri said to him before he played a match in the ODI series as inspiration.

Thakur said he and Sundar worked well with each other to make sure they kept their concentration.

By contrast, India's top-order batsmen all squandered chances to score heavily, with all but Shubman Gill getting starts but all except Cheteshwar Pujara falling to rash shots.