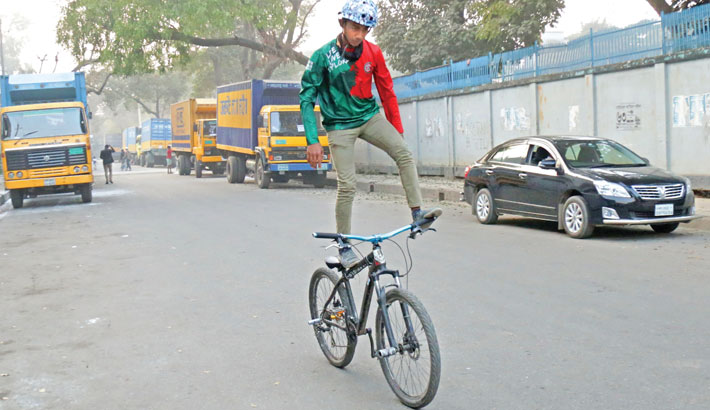 Bicycle stunt, a dangerous action intended to entertain people, are occasionally spotted in the city’s thoroughfare, which disrupts traffic and may also invite a fatal accident at any time. The photo was shot recently. —SUN photo

Though bicycle stunt is a sport for a number of youths, some busy roads in the capital are turning risky due to their random activities.

Usually Dhaka roads remain busy round the clock and movement of vehicles is hindered by their activities.

Avoiding the traffic transport, drivers always try to reach their desired destinations as quick as possible.

In such situation, bicycle stunts often disrupt their normal movement and cause fatal accidents, many complained.

They said they become panic-stricken watching such bicycle stunts.

Jahangir Alam, a private car driver, said, “While taking my employer to his office at Mohakhali, I often come across bicycle stunts around Gulshan Bridge. I get irritated due to their sudden and unpredictable movements but never see the law enforcers taking any step to stop such risky practice.” Youths doing bicycle stunts are also seen in capital’s Modhubagh Lane, Dhanmondi Lake Road, Shyamoli Ring Road, Hatirjheel, Aftabnagar, Badda Lane and Uttara area.

On some occasions, vehicles and pedestrians get hit by them.

The youths involved in such stunts usually form a group and they operate page on facebook.

They come to city streets to display their athleticism and make video footage for uploading on their social media account to impress others.

However, some bicycle stunts have been termed as sport which is common and popular among the mass people in Europe.

Mahadi Hasan Mugdho, a member of Bangladesh Stunt Boys (BSB), said, “Like any other game, there are rules for bicycle stunts as well. If done with proper training and safety precautions, it can be fun.”

“There are some youths who do bicycle stunts on busy roads posing serious risk. They should stop this. Besides, there should be separate place for bicycle stunts so that enthusiasts can explore their talents,” he added.