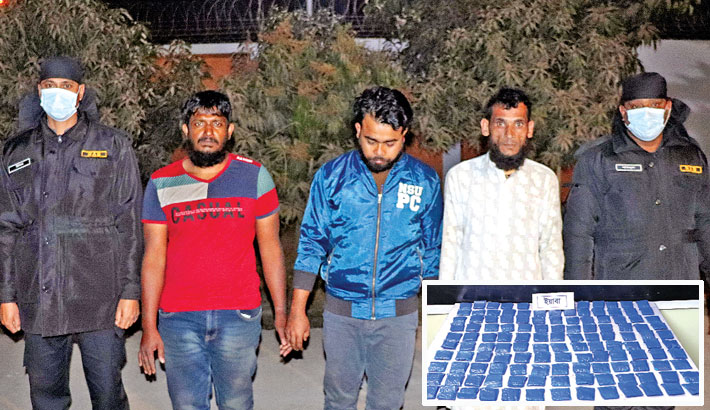 RAB personnel produce three suspected drug traders before journalists after arresting them along with 24,800 Yaba tablets (inset) hidden inside a gas cylinder of a private car in the city’s Tejgaon area on Thursday.-SUN photo

Members of Rapid Action Battalion (RAB) in a drive arrested three suspected drug traders with 24800 Yaba tablets from the capital’s Tejgaon area at midnight on Thursday.

They arrested them on charge of transporting the seized Yaba pills hidden inside the gas cylinder in their private car, RAB sources said.

The arrestees were identified as Ali Hossain 45, Zakir Hossain 40 and Jewel Hossain 27.

RAB said a team of the RAB-2 was tipped off that a gang of Yaba traders were smuggling a big consignment of Yaba tablets from the bordering point of Teknaf upazila in Cox’s Bazar into Dhaka in a private car.

As part of the move, the RAB team took position in and around the  Kawranbazar area in Tejgaon.

As per the information, when the private car reached in front of Bangladesh Textile Mills Corporation gate around 12:10am, they searched the car and found the Yaba tablets hidden inside its gas cylinder.

The striking team arrested its three passengers in this connection. In the face of the RAB interrogation, the arrestees confessed that they had been smuggling Yaba tablets into the capital from Teknaf for long, RAB said.