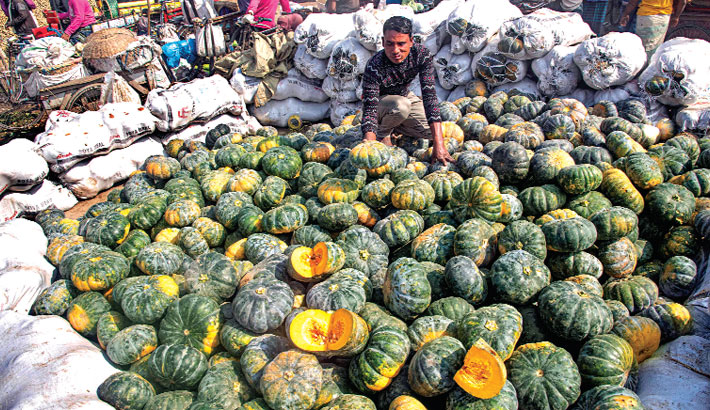 Traders display pumpkins for sale at Mahasthanhat wholesale vegetable market in Bogura. The photo was taken on Friday. — Sun Photo

BOGURA: There has been bumper production of sweet pumpkin in the district this year due to favourable weather. Hundreds of poor and marginal farmers of Jamuna, Bangalee and Nagore rivers basin of the district are expecting to make a good profit from pumpkin cultivation.

Excellent growing of the vegetable is predicting a bumper production this season, said farmer Monirul Islam of Sarikandi upazila.

“I have brought some 50 decimals of land under pumpkin cultivation this season spending Tk 5500,” said Emdad Mondol of Shalikha village under Sonatola upazila. “I am expecting to make a profit over Tk 20,000 if the weather condition remains favourable”, the grower added.

District Department of Agriculture Extension (DAE) Deputy Director Md Dulal Hossain said the highest farming of the sweet pumpkin was in Sonatola, Dhunat, Sariakandi and Sherpur upazila of the district. More than 6,000 farmers cultivated the vegetable on 1000 hectares of land this year, he added.

Farmers of Sariakandi, Shonatola, Sherpur and Dhunat upazilas have also provided necessary agri-inputs so that they can grow the popular vegetable smoothly.

In a recent visit the correspondent found the farmers have started harvesting pumpkin to sell in the local kitchen market. A small size pumpkin is being sold at Tk 35 to Tk 45, middle size one at Tk 45 to Tk 55 and big one at Tk 95 to Tk 120 in the retail market across the district.

This correspondent while visiting different areas of the district found extensive cultivation of sweet pumpkin. The farmers are interested in cultivating the vegetable as they get good profit at low production cost.

They said the cost of cultivating sweet pumpkin on 35 decimals of land is about Tk 10,000 and they get about 15,000 pumpkins.

Rahman of Dhunat upazila said he has been cultivating sweet pumpkin for the last 20 years, adding that he cultivated the vegetable on 2,580 decimals of land this year.

Retail sale of so many pumpkins is not possible at local market, so he sells them at the field to the wholesale buyers, he said.

Kabir Hossain said it is profitable to cultivate sweet pumpkins as it needs little effort and production cost is low. Besides, the vegetables are also sold to wholesalers at the field before they ripen, he said. Farmers of the area are keen in sweet pumpkin cultivation as the seeds can be cultivated along with other crops, he added.

Pumpkin has a range of fantastic health benefits, including being one of the best-known sources of beta-carotene.

Consuming foods rich in beta-carotene may reduce the risk of developing certain types of cancer, offer protection against asthma and heart disease, and delay ageing and body degeneration.