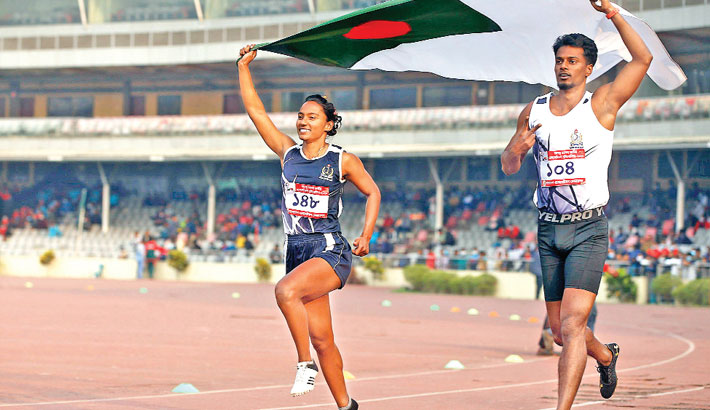 Shirin Akter, left, and Mohammad Ismail Hossain celebrate after winning the titles in men’s and women’s 100m sprint of the ongoing 44th National Athletics Competition 2021 at Bangabandhu National Stadium in the capital on Friday. — SUN PHOTO

Bangladesh Navy’s Mohammad Ismail Hossain and Shirin Akter defended their titles in men’s and women’s 100m sprint of the ongoing 44th National Athletics Competition 2021 at Bangabandhu National Stadium in the capital on Friday.

“I’m satisfied that I’ve retained my title. Thanks to my service team for supporting me. Hopefully, I will able to shorten my timing in the upcoming Bangladesh Games. The track of this stadium is responsible for this poor timing,” Ismail told the reporters after the day’s event.

“I continued my practices at BKSP during the COVID-19 break. My coach was expecting better timing from me. I’m not so happy. However, the Navy is playing a vital role in my success. I want to be the fastest woman in South Asia,” said Shirin in her reaction.

In the women, high jump event, Army’s Ritu Khatun booked a new national record of 1.70m. The Army athlete broke the 1.68m record of Bangladesh Jail’s Umme Hafsa Rumki. Rumki made the record of 1.68 meters breaking the 1.66m record of Sathi Parvin in the 2019 edition of the competition.

This year, a total of 438 athletes and 65 managers from 34 divisional and district sports associations, five services’ teams, four universities and one education board are taking part in the 36 events of the three-day competition.