We need to bowl a fuller length, says Roach 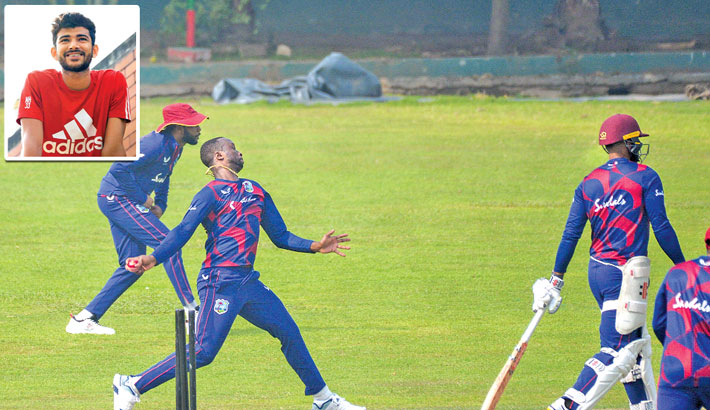 West Indies pace bowler Kemar Roach, left, bowls during their practice match of the Test squad on the BCB academy premises of the Sher-e-Bangla National Stadium on Friday. Bangladesh off-spinner Nayeem Hasan is seen in the insert. —Tanvin Tamim

West Indies pace  bowler Kemar Roach insisted that if they can bowl straight with an attacking mindset and backed by a precise field placement they are expected to get positive results against Bangladesh.

West Indian Test squad had a scenario practice match of the Test squad at the BCB academy premises on Friday where head coach Phil Simmons was emphasising how they will attack the Bangladeshi batsmen in the upcoming two-match Test series.

“It’s more attacking at the field and you try to bowl straighter because there is not much bounce in the pitches. It’s that you attack at the fieldset your fields well while there are changes; you can do like changing the pace and slow it up and staff like that. But basically get it simple bowl in good area attack as much as possible and set-up a pretty good field,” he said when asked what will be key to be successful in the two-match series.

Roach added that the experience pace trio comprised of Alzarri and Gabriel will have to pick the wickets at regular intervals while added that he is expecting the spinners will do the bulk of work.

“Yes, we have a job to do (the seasoned pace trio me, Sharon and Alzarri, spinners obviously will probably do the bulk of the work,” said Roach.

Roach can take confidence from the fact that he is quite successful against the hosts picking 33 wickets in eight Test matches that he played against hosts and he admitted it after the practice session.

“In Bangladesh, it’s always difficult for fast bowlers to get wickets. I think once you plan well and if I can execute my plans I am looking forward to doing well here as well. We are here to win because it’s a very important series to us,” he said.

“I think what we do; what we are best at and that is taking the wickets and we help the team by bowl them out and execute our plans better. We have been planning out and having a conversation with the bowling coach and ourselves obviously, we know what we want to do,” he said.

Roach added that he is well aware that the hosts will make them sweat when they take them on but added that they are not focusing on them rather trying to execute their plans.

“They are a pretty good side like Iqbal is there; Shakib is back and Mushfiqur is there and also Mahmudullah. They always give a good fight because they are mentally very tough team and they train very hard to do well,” he said.

“But as I said just focus on ourselves and do what we have to do that is plan well set the field accordingly and attack the batsmen and once you do that you can come at the top in the series,” he concluded.

While the West Indies team were doing this match scenario practice, the Bangladesh Test squad are yet to start their practice session and off-spinner Nayeem Hasan looked to pondering about his future standing at the top of the academy premises, where he is staying at the moment.

Nayeem injured him in the just concluded Bangabandhu T20 Cup and now waiting for his injured finger to heal so that he can make a comeback in the Test squad and currently he is staying at the BCB academy premises for developing his fitness.

“It is still sworn and I will be bowling after it healed totally within a week,” Nayeem told The Daily Sun adding that he is impressed with the West Indian bowlers are bowling in the nets.

“They are bowling pretty well and I don’t think it will be easy like the way it is been in the media such as they have brought the second-string team and all that,” he said.

“We have to give our best effort in the game and I am sure it won’t be a cakewalk,” he said.