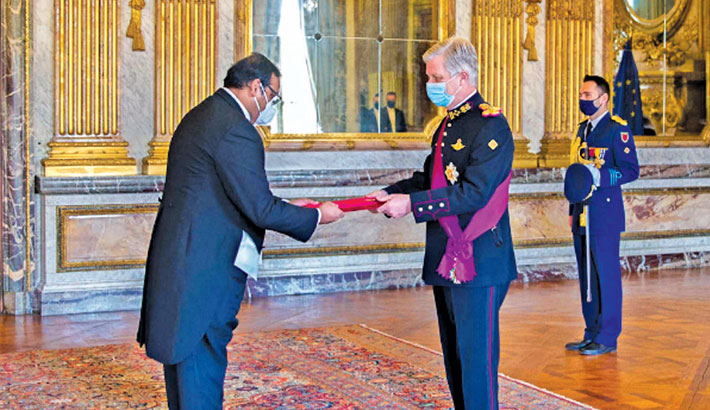 Newly-appointed Ambassador of Bangladesh to Belgium Mahbub Hassan Saleh presents his Letters of Credence to King Philippe at the Royal Palace in Brussels on Thursday.

King Philippe of Belgium has said he will consider a possible visit to Bangladesh to see the country’s impressive socio-economic development.

The King said this when newly-appointed Ambassador of Bangladesh Mahbub Hassan Saleh presented his Letters of Credence to him at the Royal Palace in Brussels on Thursday.

King Philippe of Belgium took a great deal of interest in hearing about Bangladesh’s poverty alleviation, disaster management, infrastructure development and other success stories. King Philippe recalled his visit to Bangladesh in his personal capacity in the early 1990s.

Ambassador Saleh conveyed to the King the greetings and best wishes of the President and Prime Minister of Bangladesh, said a press release of the Bangladesh Embassy in Brussels on Friday.

The Ambassador said that it would be an honour for Bangladesh if the King and the Queen can pay a visit in 2021, when Bangladesh is celebrating the birth centenary of Father of the Nation Bangabandhu Sheikh Mujibur Rahman and the 50th anniversary of the country’s independence.

The King also showed interest in the bilateral trade and investment scenario between Bangladesh and Belgium.

Ambassador Saleh spoke about the growing trade relations between the two countries and highlighted the excellent investment opportunities in Bangladesh and said that the Belgian investors may explore the same in a number of potential areas including pharmaceuticals, ICT, and engineering.

Besides, Ambassador Saleh briefed the King in detail about the Rohingya crisis and thanked him for Belgium’s supportive role in this regard in the United Nations Security Council as a non-permanent member during 2019-2020.

The Ambassador said that sustained and effective pressure on Myanmar from the international community including Belgium needs to continue for an early repatriation of the 1.1 million forcibly displaced Rohingyas to the Rakhine state in Myanmar.

Earlier, the Bangladesh Ambassador was taken to the Royal Palace in a ceremonial motorcade. He was accompanied by Deputy Chief of Mission Faiyaz Murshid Kazi and First Secretary Fakhruddin Ahamed.