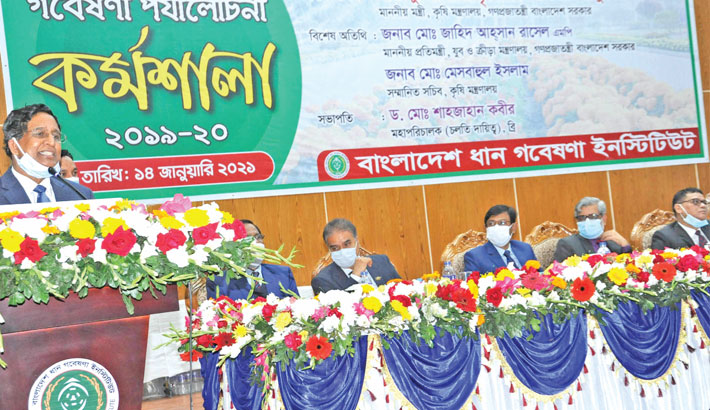 Agriculture minister Dr Muhammad Abdur Razzaque on Thursday urged the rice scientists and researchers to develop improved varieties to double rice production in the country by 2030.

He made the call while addressing as the chief guest a workshop on research review of Bangladesh Rice Research Institute (BRRI) for the year 2019-20 year at BRRI’s auditorium in Gazipur.

“Bangladesh has become self-sufficient in food despite natural disasters. BRRI scientists and their developed varieties have made significant contributions to this success,” the minister said.

“But the main challenge for future food security is that our population is growing by 2.2-2.3 million per year. The cultivable land is also decreasing for various reasons,” he stated further.

“For this, more advanced varieties and technologies need to be invented in order to double productivity by 2030,” he pointed out.

“Especially during the tenure of the present government under the leadership of Prime Minister Sheikh Hasina, BRRI has achieved great success in inventing rice varieties. During her tenure, 54 varieties and more than 200 technologies have been invented,” the DG said.

He also said that BRRI is also working hard to develop various impact-tolerant rice varieties and technologies, including those adapted to climate change impacts.

“To ensure nutritional security of the people, BRRI scientists are using the world's most advanced bio-fortification and GM technology to innovate nutritious and safe varieties. Five zinc-enriched rice varieties and 11 premium qualities varieties have already been developed,” the BRRI boss said.

State Minister for Youth and Sports Md Zahid Ahsan Russel and Agriculture Secretary Mesbahul Islam were the special guests of the programme.