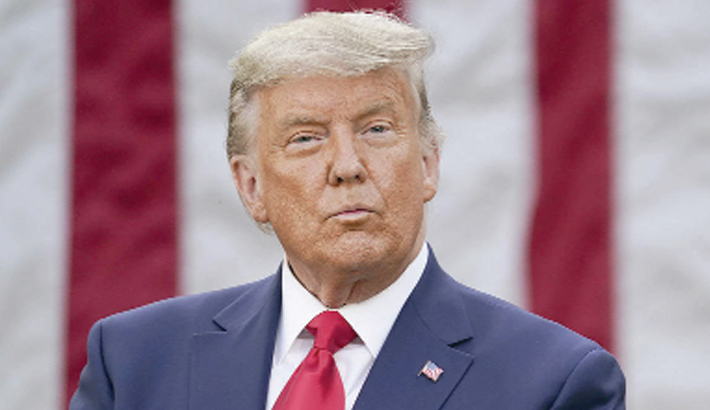 WASHINGTON: Donald Trump became the first US president in history to be impeached twice when the House of Representatives voted to charge him with inciting last week’s mob attack on Congress, reports AFP.

“Today, in a bipartisan way, the House demonstrated that no one is above the law, not even the president of the United States,” Democratic Speaker Nancy Pelosi said after Wednesday’s vote. 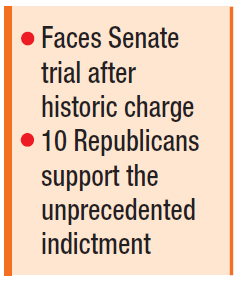 The Senate will not hold a trial before January 20, when Democrat Joe Biden assumes the presidency, meaning the real estate tycoon will escape the ignominy of being forced to leave early.

He is set, however, to face a Senate trial later, and if convicted he might be barred in a follow-up vote from seeking the presidency again in 2024.

“Donald Trump has deservedly become the first president in American history to bear the stain of impeachment twice over,” said Democratic Senator Chuck Schumer, who in a week’s time will become Senate leader.

“The Senate is required to act and will proceed with his trial.”

In the House of Representatives, the only question was how many Republicans would join the lockstep Democratic majority in the 232-197 vote. Ten Republicans broke ranks, including the party’s number three in the House, Liz Cheney.

“I am in total peace today that my vote was the right thing and I actually think history will judge it that way,” said Adam Kinzinger, a vocal Trump critic and one of the Republicans who crossed the aisle.

Holed up in the White House, Trump issued a videotaped address in which he made no mention of impeachment.

Instead, the comments focused on an appeal for Americans to be “united,” avoid violence and “overcome the passions of the moment.”

Biden, who inherits the pandemic and an ailing economy amid many other woes, welcomed Wednesday’s decision but urged the Senate to address his priorities such as approving cabinet nominations while also dealing with Trump’s trial.

“I hope that the Senate leadership will find a way to deal with their Constitutional responsibilities on impeachment while also working on the other urgent business of this nation,” Biden said in a statement.

Despite Trump’s denunciation of violence following the mayhem inflicted by his followers when they invaded Congress, fears of unrest are high.