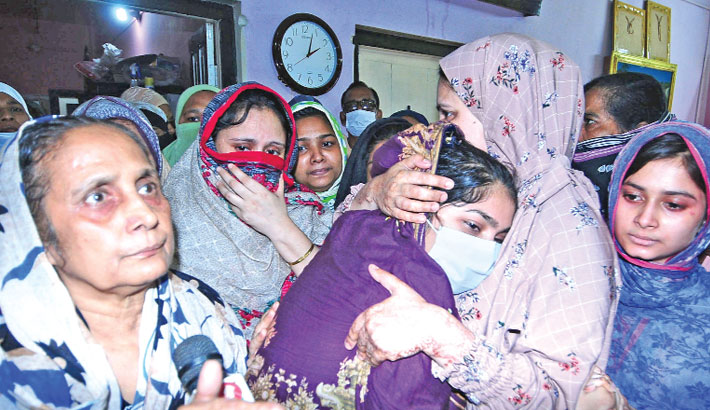 Family members and relatives of Md Asgar Ali Babul wail at his residence in Pathantuli area of Chattogram on Wednesday as a factional clash centering CCC elections left him dead. — SUN photo

CHATTOGRAM: Police on Wednesday arrested 11 persons, including rebel Awami League councillor candidate Abdul Kader of Pathantuli ward, in connection with the killing of a man in a clash between two factions over the Chattogram City Corporation polls.

Chattogram Metropolitan Magistrate Shafi Uddin granted a three-day remand for the accused after police produced them before the court with a prayer for 10-day remand.

The clash left Md Asgar Ali Babul, 55, of Sadarghat area in the city, shot dead and three others injured.

The injured were rushed to Chattogram Medical College Hospital.

The rival groups swooped on each other with firearms and local weapons over establishing supremacy.

Local sources said that the clash might have been taken place over removing posters of Kader on Monday night.

Tensed situation was also prevailing in the area since the electioneering resumed on Friday, they said.  Police detained Kader and 24 others during raids carried out immediate after the clash.

Police showed 11 of the detainees arrested in the case and sent to the court.

Additional forces were deployed in the area to ward off any untoward incident further, she said.

On the other hand, namaz-e-janaza of Asgar was held at Chattogram Government Commerce College premises on Wednesday afternoon.

AL nominated mayoral candidate Freedom Fighter M Rezaul Karim Chowdhury participated in the Janaza along with other leaders and activists. Expressing condolence to the bereaved family, Rezaul said the criminals can have no political identity and they are enemies of the society and country.

The murderers of Asgar must be punished after bringing under trial, he said.

Nazrul was councillior of the ward from 2000 to 2014 while Kader from 2015 to 2020. This time, Kader was dropped and Nazrul was given nomination from the party for the election.

Kader announced to take part in the election as independent candidate later.

Sources said Kader is a listed criminal of Chattogram Metropolitan Police and accused of a number of cases filed for murder and extortion among others.

Kader, who also served in jail, used to control Agrabad commercial area and carry out the criminal activities.