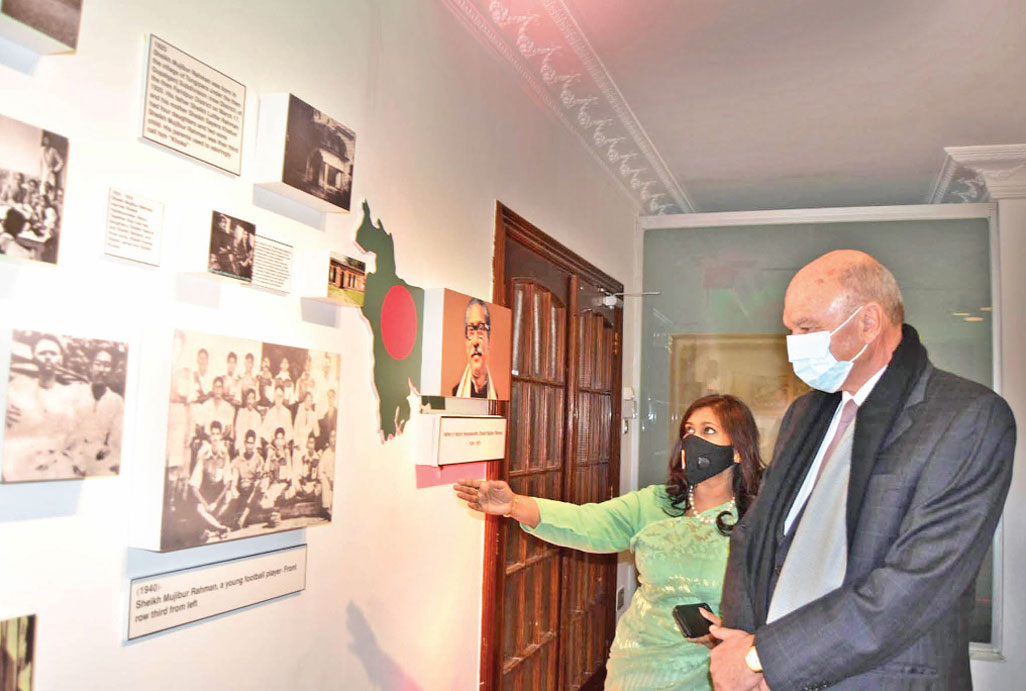 President of the Jordanian Senate and former Prime Minister Faisal Akif Al-Fayez has praised Bangladesh for achieving over 5 percent GDP growth under the leadership of Prime Minister Sheikh Hasina even during the coronavirus pandemic.

The Jordanian senate president was speaking as the chief guest at a special event organised by the Bangladesh Embassy in Amman, Jordan, marking the historic Homecoming Day of Bangabandhu, and the inauguration of the newly installed ‘Bangabandhu Corner’ in the mission compound on Sunday.

The senior politician from Jordan said how remarkable the growth story of Bangladesh is, given that so many countries experienced negative growth as a result of the economic slowdown caused by the Covid-19 pandemic.

Faruk Khan MP, chair of the Parliamentary Standing Committee on the Ministry of Foreign Affairs, was present at the programme as the guest of honour.

In his speech, he highlighted the leadership qualities of Bangabandhu and Prime Minister Sheikh Hasina.

He also thanked the Bangladeshi expatriate workers who contribute greatly to the country’s economy and assured them of all support on behalf of Sheikh Hasina’s government.

A video on the context and national mood of 10th January 1972 titled ‘Hopes and Aspirations: The Day the Father of the Nation Returned Home’, produced by Barrister Farhad, was also screened.

Sawsan Majali highlighted the role of the current government in Bangladesh and non government organisations like BRAC in transforming the lives of millions, especially rural women.

She also applauded the rapid digitisation of Bangladesh under Sheikh Hasina and how millions of mobile banking customers are ensuring financial inclusion at the grassroots level. She recalled her own visit to Bangladesh to illustrate the rapid socio-economic development taking place in Bangladesh.

In his comments, Dr Kamal highlighted the significance of Mujib Year, especially for the youth. He pointed out the timelessness of Bangabandhu’s politics and philosophy and how they are very much relevant in today’s domestic and international politics.

Kamal shared his own experience of witnessing the 7th March speech of Bangabandhu in 1971 and what impact it had on his young mind. He also narrated the initiatives undertaken by the government for celebrating Mujib Year and the golden jubilee of Bangladesh’s independence.

He lauded the Embassy in Jordan for setting up the Bangabandhu Corner, and hoped that the installation would enable Bangladeshi and foreign visitors to the mission to know more about the remarkable life of the architect of Bangladesh’s independence.

Syed Badrul Ahsan narrated the electrifying atmosphere in Dhaka and throughout at the anticipation of welcoming Bangabandhu to his motherland after almost nine and a half months of incarceration in the dark cells of Pakistani prisons.

He put Bangabandhu’s politics in historical context, and the spectacular nature of the successful independence movement of Bangalees headed by Bangabandhu Sheikh Mujib, including the role of the six-point demands and the Agartala Conspiracy Case.

He also flagged the relatively young age by which Bangabandhu achieved his aim of an independent country and the heavy personal price he had to pay for it, including but not limited to, spending at least ten years in prison, for his politics alone.

Ambassador Nahida Sobhan termed Bangabandhu as the ‘apostle of freedom’, as she listed the reasons for his stature as the undisputed architect of our independence.

She expressed hope that the ‘Bangabandhu Corner’ in the Bangladesh Embassy in Amman, Jordan will allow visitors to learn about the sacrifices Bangabandhu Sheikh Mujib made in realizing the dream of an independent and prosperous Bangladesh.

The discussion was arranged by the Bangladesh Embassy in Amman, Jordan as part of the ‘Mujib Barsha Webinar Series’. Earlier, on December 29, 2020, the Embassy arranged a webinar on ‘Liberation of Bangladesh and the Dream of Sonar Bangla’, which was attended by, among others, the Bangladeshi and Palestinian Foreign Ministers.