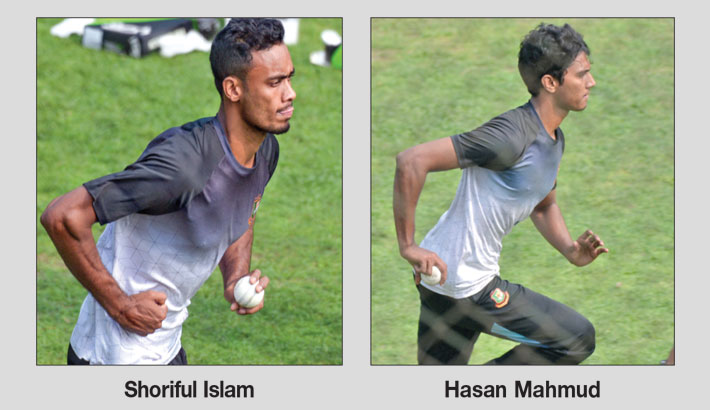 Bangladesh’s new pace prodigy Shoriful Islam and Hasan Mahmud looked to have a point to prove as they began their stint in national nets on the opening day of the preparation camp at the BCB indoor on Sunday.

Tigers started their preparation camp with a net session ahead of the upcoming home series against West Indies and it looked to be the contest between pace bowlers and batsmen.

Shakib Al Hasan made a return in the national practice jersey for the first time since completing his suspension. Although he bowled a couple of overs in the nets largely trying to give flight, he never looked at ease while he was batting.

Probably that was the sole reason he went back into the indoor to have a long batting session in front of the bowling machine after completing his batting at the nets where he was beaten by Hasan, who got him out a couple of times with his sheer pace and variations.

Bangladesh head coach Russell Domingo was closely watching the bowling of Hasan and looked to be impressed with the way he handled himself against the seasoned campaigners. Hasan looked to be in a furious mood when he bowled against Mushfiqur Rahim and made him look vulnerable against the deliveries that he pitched up outside the off-stump with vicious pace.

If Hasan was the major attraction at midway through the net session, Under-19 pace bowler Shoriful seemed to be determined to make the top order struggled against his angling deliveries.

Najmul Hossain Shanto and ODI skipper Tamim Iqbal were at the receiving end against Shoriful, who was one of the highlights in the Bangabandhu T20 Cup.

Shoriful was seen bowling his heart out against Tamim probably trying to impress him the most considering he will have the last say when the team will be shortened for the ODI series. Domingo along with other foreign coaches was available in the nets along with Sohel Islam, who replaced Daniel Vettori for the series. However, it was not the case for two British passport holders Jon Lewis and Ottis Gibson, who are still isolating in the hotel.

According to the new law implemented by the government recently, passengers arriving from the United Kingdom must be institutionally quarantined for 14 days as a measure to contain the spread of the new variant of coronavirus.

On December 19, the World Health Organization said it was in close contact with UK officials over a new Covid-19 virus.

“We have applied to the government for them (coaches with British passports) and waiting for their approval so that they can join the preparation camp,” BCB chief executive Nizamuddin Chowdhury said on Sunday.

Bangladesh top-order batman Najmul Hossain expressed his excitement on their return to international cricket with the home series against West Indies.

“We are very excited as we are joining the national camp after a long time and we had a good practice session,” he said.

“We enjoyed the session as we are meeting each other after a long time. Though we were together in the last tournament but sharing the national dressing room is different.

Bangladesh however suffered a setback on the opening day of their preparation camp as uncapped Parvez Hossain Emon recurred an old injury and rested for a week.

BCB officials confirmed that media will not be allowed during the practice games.