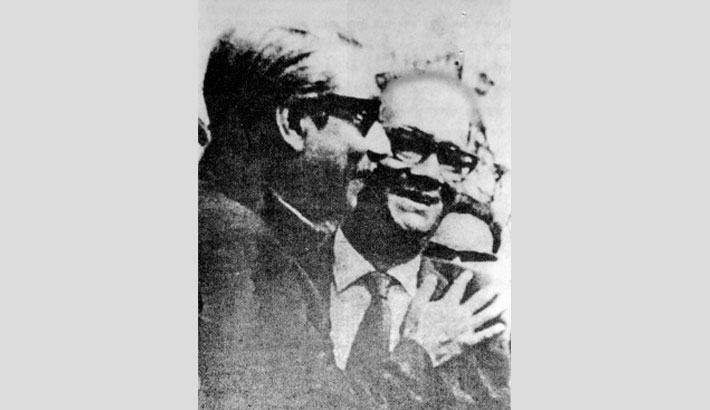 "A drop of ink makes millions think." I am told by a very senior journalist as well as by a very elderly lawyer that it was Justice Murshed who would tell this. After all, it was Justice Murshed who was the most enlightened personality of his times and it was this enlightenment or this beacon of light that he wanted to pass on to his fellow countrymen. What late Allama Iqbal was to his part of the world Murshed was to his native Bangladesh--"A friend, philosopher and guide." Late Chief Justice Syed Mahbub Murshed was arguably the most distinguished constitutional lawyer and the most eminent jurist that our South Asian sub-continent has ever seen. He was indisputably our nation’s most articulate advocate of human rights and the most eloquent civil libertarian. Not only did Syed Mahbub Murshed discharge his duty to the nation with outstanding competence, he also set a high standard for all professionals to emulate. The question that does arise will ever be such a great man, the greatest judge will ever be born again who subsequently after resigning became an independent political figure who participated in salvaging and saving our Bangla nation. He was also one of the founders of the nation.

Murshed had been a votary of discipline throughout his life and this formulated not only his character but also built up his brilliant academic career which culminated in his becoming a barrister from the honourable society of Lincoln’s Inn in London. In reality, he was an academician right to the end of his life as he grew in wisdom, knowledge and learning. He was a scholar of the highest eminence. However, despite Syed Mahbub Murshed's aristocratic background, he had his roots in the people. He always tried to organise and systematise with them within the realm of the rule of law to ensure more benefits to the fundamental rights of the citizens. This was confirmed by social justice within the purview of economic order for  fair distribution of wealth. Justice Murshed did this with the depth of peotic and mystical visions and maintained a fine balance enriched by religious and moral fervour. Taking into account the prevailing situation of his times, a very few were knowledgeable and had a rare distinction to reach the highest pedestal. Syed Mahbub Murshed was one such rare gem. And hence, Justice Murshed has today become a living history.

In the later part of 1954, he was elevated to the bench of the Dhaka High Court. As a judge, Syed Mahbub Murshed remained committed to his lifelong ideals of liberty, justice and excellence. His judicial pronouncements delivered while sitting in the bench of the Dhaka High Court and the Supreme Court of Pakistan briefly as an ad-hoc judge in 1962 plus as Chief Justice reflected his ideals of judicial independence. Some of his judgments created constitutional history and won for him international acclaim. Justice Murshed was unique and exemplary with the qualities such as "grace, cultured, good natured, wit plus humour. The power of public understanding and knowledgeable oratory, kindness and sympathy plus a capacity to appreciate other man's point of view were characteristic of his personality. In many ways, he was an aristocrat in the finest sense of the term. Justice Murshed was firmly committed to the ideals of democracy in upholding the cause of justice even against extreme odds. He kept afloat the flag of liberty in defiance to all kinds of pressures even from the highest quarters. Above all, Murshed fearlessly upheld the rule of law without fear or favour. Like in my earlier article, I would like to mention what some intellectuals said about this legend.

Late Justice Abu Sayed Chowhury wrote about him stating that "Justice Murshed in his judgments reached correct decisions indicating the boldness of his mind. He gained fame for his wisdom and intelligence, as well as deep respect of the public as he was fearless. It was Justice Murshed, the man, who had for many years with courage dauntlessly upheld the rule of law and had administered justice without fear or favour despite severe pressure." Justice Abdur Rahman Choudhury in his tribute said: "A giant has passed away, a giant in the legal field, a giant amongst the jurists and a giant in own right. For those of us who had the privilege of knowing Justice Murshed intimately, his death is too overwhelming for words and too deep for tears." In his writings on Justice Murshed, Justice K M Sobhan mentioned that "In life and in death he was a king without the trappings of a monarch, for he built an empire in the hearts of his fellowmen." H S Suhrawardy termed Murshed "as an unfailing protector of civil liberties." In his analysis, Justice Mustafa Kamal stated that "Justice Murshed presented himself as the colourful personality of wisdom both inside and outside the court." Syed Ishtiaque Ahmed observed: “When the true history of the 20th century will be written, the period from early 1955 to late 1967 might as well be called the age of Murshed."

A little over five decades ago, when our country was under alien rule, when those who governed our country from more than a thousand miles away were determined to impose their culture upon us and erase our cultural heritage, it was Murshed from the Bengali intellectuals who stood up to fight for the age-old traditions and cultural identity of Bangladesh. It will always be remembered as in 1961, he had organised the “Tagore Centennial celebrations” in Dhaka and other parts of the country which is now our free Bangladesh and this was in defiance of the opposition of the then Pakistani rulers. When the great tide of nationalism that swept the country in the nineteen-seventies, originated from ripples that were noticeable in the fifties and sixties and the distinguished person who figured most prominently in this process was Syed Mahbub Murshed. The fight for a separate identity became, through a process of metamorphosis, a battle for nationalism. The stirrings of a nation in the making in the late nineteen-fifties and sixties found eloquent expression and these were reflected in the manifold speeches, judgments and writings of Justice Murshed. In this sphere, he became the most articulate spokesman of Bengali nationalism.

In his earlier professional life as a lawyer despite preoccupations Murshed found time to write and publicly speak with brilliance and also to participate in political, social and humanitarian activities. His article "Quo Vadis Quaid-e-Azam where he criticised the policies of Mohammed Ali Jinnah in defence of his uncle Fazlul Haque appeared in the 'Statesman' in Calcutta (now Kolkata) and the 'Telegraph' in London in 1942 created a thought-provoking stir. During the famine in 1943 and later the communal riots in 1946, Murshed worked actively with the 'Anjuman Mofidul Islam.' Remaining the humanist that he was in the late fifties and early sixties of the last century he was the President of the Red Cross. Deep down, Murshed was a Sufi and a liberal Muslim and spoke of tolerance which was against any form of communalism. Further again, the communal violence that shook the sub-continent in the partition year, he was one of those men who were primarily responsible for setting into motion the process that culminated in the Liakat-Nehru pact. Murshed was also drawn to the vortex of the language movement in the early fifties.

In addition to his monumental work another significant contribution by then Chief Justice Murshed was that he gave final touch to the drafting of the historic six points in 1966 for provincial autonomy which was the demand of Bengali intelligentsia. This was what Sheikh Mujib fought and was jailed for. In early 1954 while he was still a practising lawyer were among those who drafted the 21-point manifesto of the Jukta-Front government and this was summarised by Murshed into the famous six points. Later in 1966, Mazaharul Haq Baki, the then President of the Chhatra League recorded that no one except Chief Justice Murshed dared to accept being the chief guest at their annual conference. This is where Murshed also like Sheikh Mujib made the clarion call for provincial autonomy of the then East Pakistan.

At a critical time in our history while the country was sensing a victory for autocracy with President Field Marshal Ayub Khan about to celebrate his so-called decade of reforms and the Agartala Conspiracy Case was being formed, Murshed resigned from the post of Chief Justice to join the masses for the fight for democracy. Among the first things that he did was to help  organise the defence of the Agartala Conspiracy case and subsequent to this Murshed entered politics directly, which was the major momentum to the anti-Ayub movement. It was because of Murshed who was leading the charge during the mass upsurge. It was account of Murshed's constant public demand that not only Sheikh Mujib but all the co-accused in the Agartala Conspiracy case must unconditionally be released and also exonerated.

Perhaps what is most significant was that during the round-table conference while Ayub was virtually on his knees and in addition, with the dissolution of the one unit in West Pakistan, Justice Murshed demanded one man, one vote. Prior to this, in the then Pakistan National Assembly, there was parity of 150 seats each for East and West Pakistan. As Murshed's one man, one vote proposal was accepted and because of this 169 seats out of 300 came to East Pakistan for the next national election. Therefore, in reality it was clearly Justice Murshed who paved the way as to whoever would be the majority in East Pakistan could form the National Government.

It was Murshed's protest resignation as chief justice that made the intelligentsia in the country to find him as the only acceptable presidential candidate against Ayub Khan. During our War of Liberation, his refusal to collaborate with the ruling military-junta is also recorded by the historians. Hence, in fact it can be said that Justice Murshed is the founding father of Bengali nationalism and a keeper of our national conscience. In conclusion, he will remain living in history as the only person who served his community above self-interest.