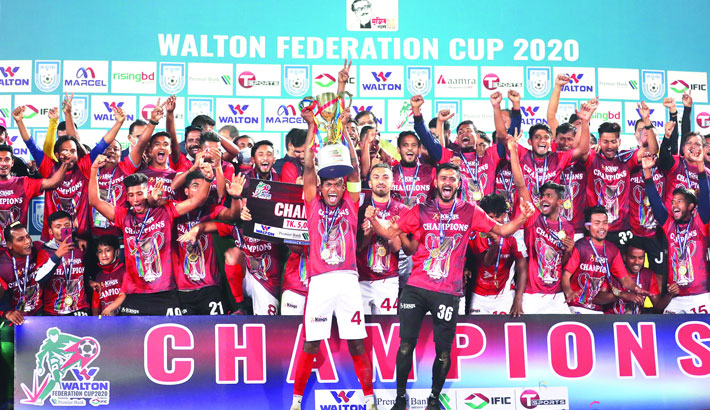 Bashundhara Kings players and officials celebrate with the trophy of Walton Federation Cup Football 2020 at the Bangabandhu National Stadium in the capital on Sunday. - Reaz Ahmed Sumon

Country’s top-tier sports club Bashundhara Kings retained the title of Walton Federation Cup Football beating Saif Sporting Club Limited by 1-0 in the final of the meet’s 32nd edition at the Bangabandhu National Stadium in the capital on Sunday.

Argentine-born Chilean forward Raul Oscar Becerra netted the match winner in the 52nd minute as the big-budgeted club lifted their first trophy in the new season.

It ended runners-up after conceding 3-1 defeat to Dhaka Abahani Limited in their first appearance in the Federation Cup final in 2018.

The defending champions made a dominating start against Saif SC, who were playing their first-ever Federation Cup final.

Kings could have opened their account in the 4th minute but their captain Topu Barman’s goal was disallowed by referee Jalal Uddin citing off-side.

Both Kings and Saif got several close chances in the first half. In the 16th minute, Kings defender Bishwanath Ghosh was denied by Saif SC goalkeeper Md Pappu Hossain.

Kings goalkeeper Anisur Rahman Zico also proved his worth in the match by spoiling a close chance from midfielder Foysal Ahmed Fahim in the 20th minute.

He also defended a direct free-kick from defender Rahmat Mia just a few seconds before the half time.

Kings finally broke the deadlock in the second half with their Argentine forward Raul Becerra netting with a left footer from inside the box utilising a pass from Brazilian forward Robson Azevedo da Silva Robinho in the 52nd minute (1-0).

Saif SC tried hard to equalise the margin after conceding the goal but Kings goalkeeper Zico spoiled all of their efforts with his eye-catching performances.

Zico denied a powerful close-range shot from Nigerian forward Ikechukwu Kenneth Ngwoke from outside the box in the 70th minute and fisted again his header from inside the box in the 86th minute to make sure his team lifting the trophy for the second time in a row.