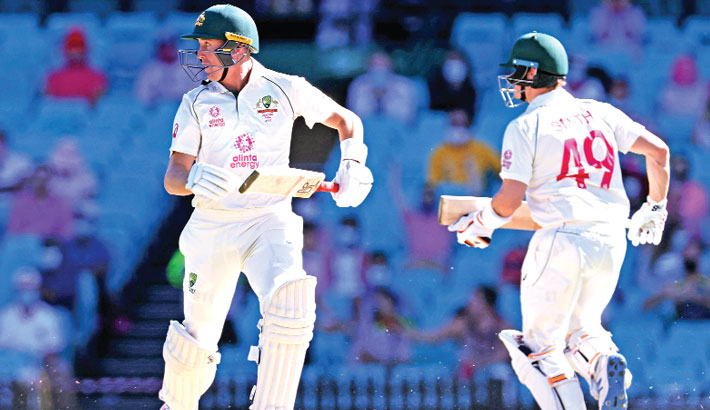 Australia batsmen - Marnus Labuschagne, left and Steven Smith run between the wickets on the third day of the third Test against India at Sydney Cricket Ground in Sydney on Saturday. —AFP photo

First innings heroes Marnus Labuschagne and Steve Smith steered Australia to an commanding 197-run lead in the high-stakes third Test Saturday, leaving an injury-hit India with a mountain to climb.

They came to the crease after Will Pucovski and David Warner fell early, pushing them to 103 for two at stumps and a strong position with the four-Test series locked at 1-1.

Labuschagne, who scored 91 in the first innings, was not out on 47 and Smith, who blitzed 131 in his first knock, unbeaten on 29.

Australia padded up again after taking eight wickets on day three to dismiss India for 244 in reply to the hosts' 338.

"I woke up today hoping that by the close of play we still wouldn't be bowling and to have a lead of near 200, a great day," said Australian pace spearhead Pat Cummins, who took 4-29.

"I think we need (to bat) for at least a session-and-a half, two sessions tomorrow and then have a good crack at them."

India's Cheteshwar Pujara, who made a patient 50, said early wickets would be crucial for his team on Sunday.

"We need to pick up a couple of early wickets tomorrow morning and not allow them free runs in the first session," he said.

India's task was made harder by the absence of key spinner Ravindra Jadeja, who was sent for scans after a hit to the thumb while batting. Wicketkeeper R

ishabh Pant joined him in the clinic after a nasty blow to the elbow.

It piled more misery on India, who were already without injured bowlers Mohammed Shami, Umesh Yadav and Ishant Sharma and batsman KL Rahul, while skipper Virat Kohli is on paternity leave.

The Indian team management has reportedly filed an official complaint of racial slurs against fast bowlers Mohammed Siraj and Jasprit Bumrah at the hands of the crowd during the 3rd Test against Australia at Sydney Cricket Ground, reports Hindustan Times.

As per a report from Cricbuzz, the events took place during the 2nd and 3rd day of the Test.

The report further stated that the stand-in captain Ajinkya Rahane and R Ashwin along with senior players in the team spoke to the two umpires Paul Reiffel and Paul Wilson at the close of play on Day 3, and brought the events to the notice.

There was reportedly a discussion between the umpires, the senior player, and the security official after the stumps on Friday.

The report adds that the issue rest with the ICC until the global cricketing body takes an action on the complaint.