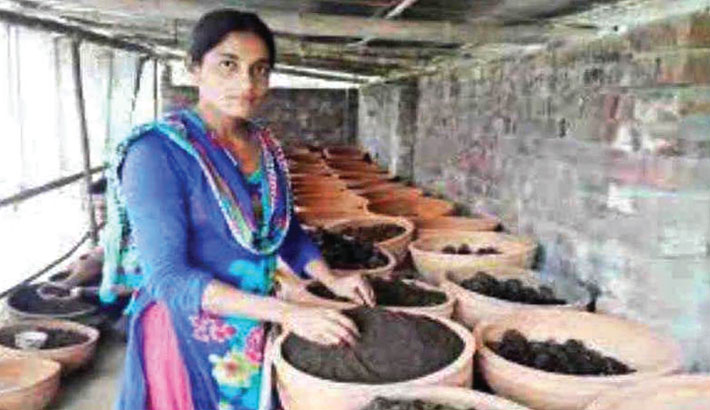 JASHORE: A woman has become a pioneer entrepreneur of vermicomposting at Barbakpur village in Jhikorgaccha upazila of the district. She is now funding her own studies and supporting her parents financially through this venture.

The author of this successful story of vermi venture is Nasrin Sultana, graduated in Social Science from Jhikorgaccha Women's Degree College, and also completed a diploma in agriculture. Now, Nasrin has clearly shown that a daughter should never be considered a burden, "but the pride of the family".

In 2016, she started small -- out of the same premises she lives with her family -- more of an experiment than a business.

“I started my business with just two big clay pots, cow dung and 100 grams of earthworms. An agriculture officer of the area provided the earthworms to me in 2016. After producing my first fertilisers, I used them on our farm land," she says.

Vermicomposting is a process based on earthworms and microorganisms through which organic waste is converted into fertilizers, she informed.

At the beginning, her neighbours and classmates used to laugh at her. "Now they admire me," says Nasrin, who has recently constructed a shed by selling out an additional Tk 14,000-15,000 for making vermicompost.

“Vermicompost improves the fertility conditions of soil by increasing the availability of nutrients for plants, in turn increasing the farm production," she adds.

Each month, Nasrin earned around Tk 12,000-15000. "I have also built an organic agriculture farm on the roof of my house using my fertilisers," says the youngest daughter of Lutfur Rahman, a farmer.

"My vermicomposting business has made it all possible," says the entrepreneur.

Hirak Kumar Sarkar, upazila officer of the Department of Agriculture Extension, feels that all women in the sub-district should take inspiration from Nasrin and script their own success stories. "Many women have already shown interest in setting up small vermiculture units in the area," he says.