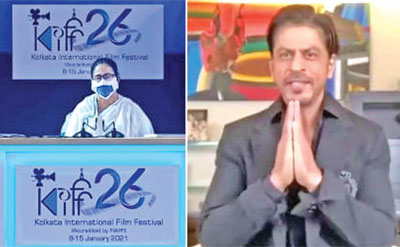 The 26th Kolkata International Film Festival began on Friday. West Bengal Chief Minister Mamata Banerjee and actor Shah Rukh Khan were present at the online inauguration  programme. The inauguration was very different from what it has been for years now, due to the coronavirus pandemic, reports agency.

A total of 81 feature films along with 50 short and documentary films from 45 countries are being screened at eight venues this year.

The 26th edition of KIFF was to take place from 5th to 12th November last year, but it was rescheduled for 8th to 15th January due to coronavirus pandemic.

Started in 1995, it is one of the oldest film festivals in India and over the years has become a star-studded annual event in Kolkata. Bollywood actors, including, Amitabh Bachchan, Shah Rukh Khan and other celebrities including former Indian cricket captain Sourav Ganguly have attended the inaugural ceremony in the past. In 2019, more than 200 full-length films and around 150 short films and documentaries from more than 70 countries were offered at the 25th KIFF.