Operators fail to take away hanging wires by deadline 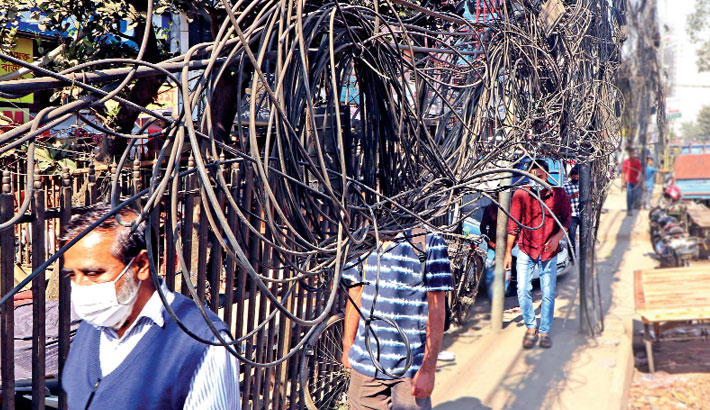 Internet and TV cables are hanging from electricity poles in the capital’s Bangla Motor area but it seems that service providers are reluctant to remove those overhead cables from the poles. The photo was taken on Friday. —MD NASIR UDDIN

Dhaka South City Corporation (DSCC) has resumed its drive to remove overhead cables from areas under its jurisdiction in a bid to give the city a more beautiful look.

It launched the drive again on January 3 after TV cable operators and internet service providers failed to take away their lines that were hanging haphazardly overhead within the deadline.

DSCC officials said the cable operators and internet service providers were supposed to remove the overhead cables and put those underground by December 2020 as per their commitment. However, they failed to keep their words.

“We’ll continue the drive to remove the surface service lines as they haven’t fulfilled their commitment of taking all cables underground. They were given enough time. We waited for long and it’s not possible to give the operators any more time,” said DSCC Chief Executive Officer ABM Amin Ullah Nuri.

ISPAB General Secretary Md Emdadul Hoque said although the DSCC authorities set December as the deadline for removing the cables, the operators could not take those underground for lack of experience about the huge job. “We’re completely new in the cable relocation work. There’re also so many challenges and complexities to complete the task in such a short time,” he said.

Despite limited resources and lack of experience, they have completed 80 per cent of the work

at Dhanmondi Satrasta to the BGB Gate, he claimed.

Seeking more time to complete the relocation job, Emdadul pledged to remove all surface cables and install the lines underground along all VIP roads by March and all major roads by October next.

He said cutting of cable lines abruptly will not bring any positive outcome, rather it will create problems and sufferings for those availing the services.

The ISPAB and cable operators claimed that they have completed work to take lines underground from the US Embassy to Kakoli of Banani, from Pakistan High Commission in Gulshan-2 to Shooting Club at Gulshan-1 and some roads of Uttara Sector-4.

She said the DSCC started removing the overhead cables on January 3 as per the decision taken by its Mayor Barrister Sheikh Fazle Noor Taposh.

The drive will continue in other areas of the city corporation for removing such cables, Tanjila said.

Angered at the drive, operators threatened with an internet blackout in the capital.

In October, they sought time till November to transfer cable service lines underground. The time was later extended till December.