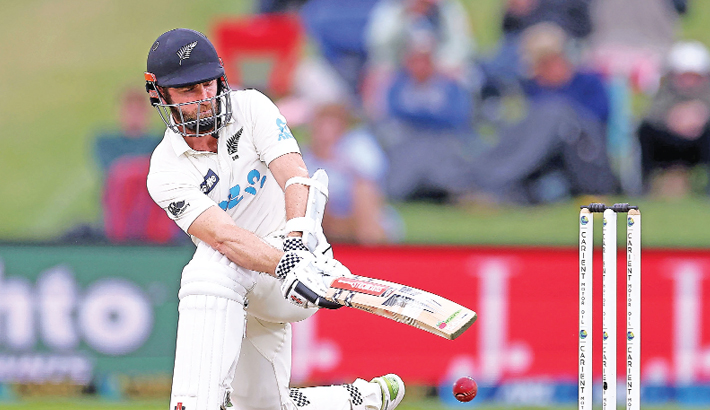 New Zealand captain Kane Williamson plays a shot on day three of their second Test against Pakistan at Hagley Oval in Christchurch on Tuesday. —AFP photo

Kane Williamson underscored his ranking as the world's premier batsman with a masterful double century as New Zealand took control of the second Test against Pakistan on Tuesday.

In between the showers at Hagley Oval in Christchurch, Williamson was in classic form, batting for nine hours 33 minutes for his 238 and leading New Zealand to an imposing 659 for six declared to lead Pakistan by 362.

At stumps on day three, the tourists were already in trouble at eight for one, with Kyle Jamieson adding to his five-wicket haul in the first innings by removing Shan Masood for a duck.

It was a relentless performance from Williamson who became only the second New Zealander after Brendon McCullum to score four double centuries.

Williamson delayed the declaration until Mitchell completed his maiden century and the all-rounder said despite his unbeaten 102 off 112 balls it remained a good pitch for the bowlers and should produce a result.

Williamson should have been out for 177 on the first ball after the first of two rain stoppages, but as has happened several times in the Test the chance was put down, this time by Azhar Ali, who earlier in the day had dropped Henry Nicholls short of his century.

Williamson and Nicholls had rebuilt the innings after New Zealand were reduced to 71 for three on Monday's second day.

By the time Nicholls was dismissed early in the afternoon session for 157, the pair had put on 369, the third-best all-time partnership for New Zealand and a record for the fourth wicket.

The day had resumed with New Zealand 286 for three, 11 runs in arrears and with conditions favourable for the bowlers who had cloud cover and a ball only five overs old.

But for every plan Pakistan set to dismiss Williamson, he had an answer -- with a range of strokes from silky touches to powerful drives.

The end came for Williamson three overs before tea when he skied a short ball from Faheem Ashraf and was caught in the deep by Masood.

Nicholls, dropped on 92 and 133, was hampered by a calf strain which left him hobbling between the wickets.

But he was still able to attack, with boundaries producing 48 of his 68 runs on day three, before he top-edged a short ball from Mohammad Abbas and was caught at deep fine leg.