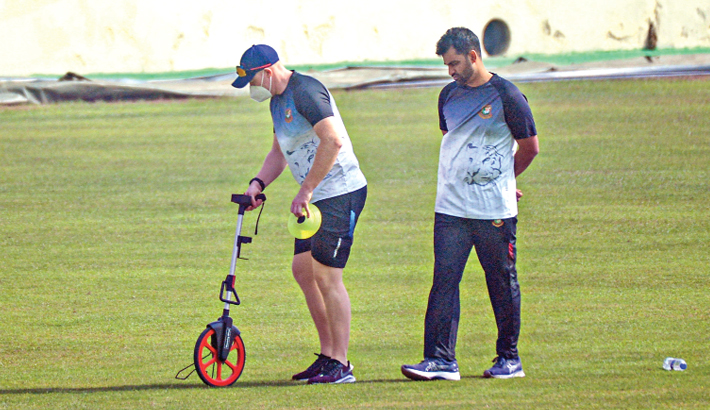 Bangladesh cricket began its journey without Mashrafe Mortaza and it was business as usual at the home of cricket on Tuesday.

Cricketers began their preparation for the upcoming home series against West Indies as several of them were involved in individual training session at the Sher-e-Bangla National Stadium.

The arrival of ODI skipper Tamim Iqbal and his fitness drill along with some of his team mates in front of Bangladesh Cricket Board’s head of physical performance Nick Lee clearly indicated that the hosts are pulling up their socks ahead of the series that will mark their return to international cricket after 10 months.

West Indies will arrive on January 10 and will quarantine for seven days before playing their first game – a warm-up match against a local selection on January 18.

The first two ODIs of the series will be held in Dhaka respectively on January 20 and 22 while Chattogram will host the final ODI on January 25.

The visitors are scheduled to play a four-day practice game at the MA Aziz Stadium on January 28-31 while the first Test is scheduled on February 3-7 at Chattogram’s Zahur Ahmed Chowdhury Stadium.

The series concluding last Test will be played at the Sher-e-Bangla National Stadium in Dhaka on February 11-15.

According to national selector Habibul Bashar the training camp will begin from January 10 while the cricketers will be asked to enter the bio-bubble from January 7, one day before Tigers head coach Russell Domingo returns back to his workplace along with pace bowling coach Ottis Gibson and fielding coach Ryan Cook.

Foreign coaches left the country after the end of Bangabandhu T20 Cup in order to spend their Christmas holiday with their families.

The exclusion of Mashrafe from the ODI squad against West Indies remained the talking point among the journalists but at the same time there were murmurs that it was time to move on for the Tigers, sans Mashrafe.

Team management can heave a sigh of relief as pace-bowling all-rounder Mohammad Saifuddin started running session indicating that he is well on course of recovery ahead of the international fixtures.

The 24-year-old suffered an ankle injury during a training session before Bangabandhu T20 Cup but managed to make a comeback in the middle of the tournament for Minister Rajshahi.

However, the cricketer from Feni has been struggling with his ligament despite recovering from the ankle injury and an MRI showed that Saifuddin has injured the ligament on his right leg.

Saifuddin, who is going through a rehabilitation program under the observation of BCB’s medical team, earlier was seen doing strength work in the sand.

Saifuddin, the like-for-like replacement of Mashrafe and expected filler of his boots in the long run, will have to undergo a fitness and bowling test ahead of the ODI seires.

Bangladesh’s Twenty20 skipper Mahmudullah also suffered a slight injury in his hand during an indoor batting session on Tuesday but BCB chief physician Debasish Chowdhury confirmed it a minor one.

The excitement of young left-arm pace bowler Shoriful Islam, who forgot to follow the bio-bubble protocol that is maintained in the BCB to express his excitement to media, was nothing unexpected considering it was his maiden call-up in the national preliminary squad.

“I am looking forward to share the dressing room with the seniors and if I earn a spot, I would try to make the most out of it,” he told the reporters.

While other members of national team were busy honing their skill in the indoor, it was completely a different case for Mashrafe, who said that he had taken everything professionally and would continue to play till he enjoys.

“This is a professional world. They have taken the decision (of my exclusion) and I am taking the decision professionally,” Mashrafe said with adding that he is eyeing to continue playing domestic cricket.

This is the first time Mashrafe was dropped from the national team for performance as earlier every time he was excluded only because of his injury.