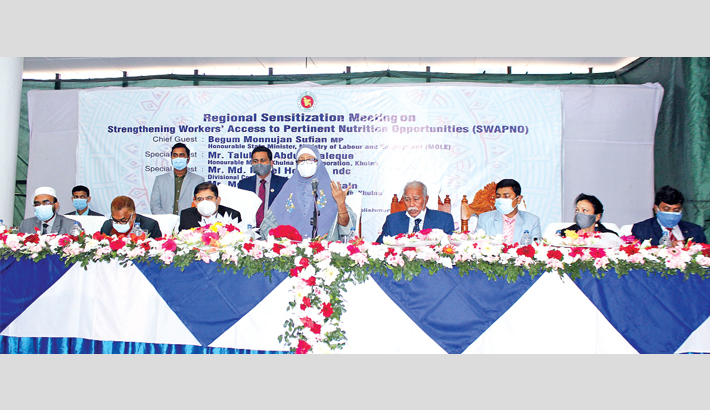 State Minister for Labour and Employment Begum Monnujan Sufian speaks at a workshop titled ‘Strengthening Workers’ Access to Pertinent Nutrition Opportunities (SWAPNO)’ at a hotel in Khulna on Tuesday.

Speakers at a workshop said a large number of workers at different industries are suffering from malnutrition. About 43 percent female workers at ready-made garments (RMG) sector are victim of malnutrition.

Malnutrition can reduce the working capacity of workers and productivity by 20 percent. Hence, it is very important to implement the Plan of Action (2021, 2041), taken up by the government, and to ensure nutritious foods for the workers for achieving Sustainable Development Goals (SDGs), they said.

They made the observation at a workshop titled ‘Strengthening Workers’ Access to Pertinent Nutrition Opportunities (SWAPNO)’ at a hotel in Khulna on Tuesday.

Department of Inspection for Factories and Establishment (DIFE) and Department of Labour in association with Switzerland-based organization ‘Global Alliance for Improved Nutrition (GAIN)’ organized the event.

In her speech, Begum Monnujan Sufian said, the government is committed to facing the challenge of malnutrition as it causes economic losses, hampering the national development.