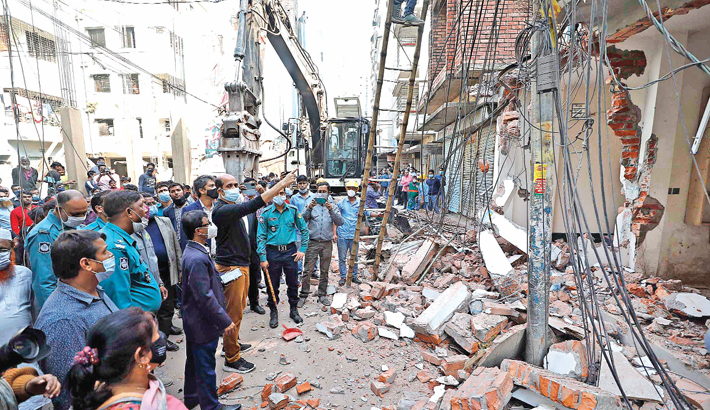 Dhaka North City Corporation (DNCC) and Rajdhani Unnayan Kartripakkha (RAJUK) on Tuesday conducted a demolition drive to free both sides of a road from illegal grabbers in Bhasantek of Mirpur area in the capital.

Officials of RAJUK and DNCC said that residents of the area were suffering a lot due to heavy traffic congestion, as building owners on both sides of the road grabbed a major portion of it.

Executive magistrate of RAJUK Jesmin Akhtar led the demolition drive at the approach road between Bhasantek and Matikata area.

Mayor Atiqul Islam and top officials of DNCC visited the spot during the drive.

DNCC Mayor Atiqul Islam said that the approach road from Matikata to Bhasantek is 20 feet wide as per the design of RAJUK, but building owners have grabbed a major portion of the road creating traffic congestion frequently.

He said, “Due to illegal grabbing, the road now shrinks to eight to nine feet wide. Commuters have to wait for hours due to acute traffic congestion.”

Atiqul Islam said that they are conducting the drive responding to the requests of common people and public representatives of the area.

“We have started the eviction drive against illegal grabbers. We will continue it.”

During the drive, some locals, however, came up with some documents and protested the drive saying that they are not grabbers, but real owners.

Imran Hossain, a local, said that the road is actually not a government property, but it is built on private land.

He claimed that the government never acquires land for the road.