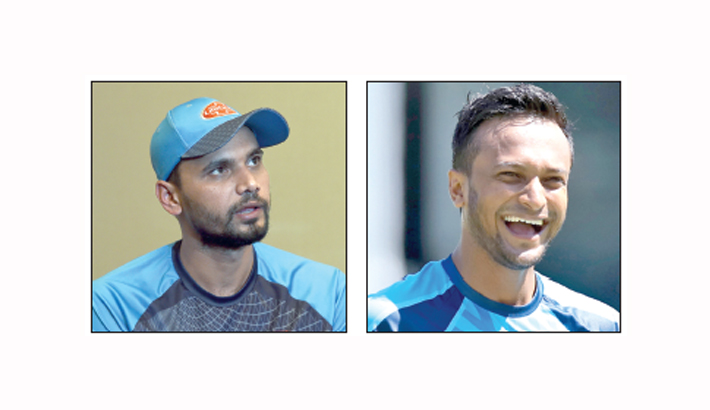 Bangladesh Cricket Board indicated the end of Mashrafe Mortaza era as he failed to make a cut in the 24-member preliminary squad for the forthcoming three-match ODI series against West Indies.

BCB on Monday announced the preliminary squads for both ODI and Test series against West Indies that marked the return of Shakib Al Hasan, who had completed his one-year ban last year.

However, Mashrafe, country's highest wicket-taker in ODIs and longest-serving captain, remained the major talking point during the announcement.

Mashrafe, who had already quitted ODI captaincy during Bangladesh’s last home series against Zimbabwe but made himself available only as a player, was trying to make a place in the ODI squad through the performances of a domestic T20 tournament.

Mashrafe gave a test of his fitness and skill in the last month’s Bangabandhu T20 Cup, where he also bagged his maiden five-wicket haul in T20s.

Chief selector Minhajul Abedin however made it public that they are not considering the 37-year old for national ODI team anymore as he is not part of their 2023 ICC World Cup plan.

“We are beginning this series without Mashrafe and we are keeping an eye on 2023 World Cup. Our team management had given us a plan where the vision is 2023 World Cup and keeping that in mind we decided not to include him,” Minhajul told reporters at the Sher-e-Bangla National Cricket Stadium.

“We have full respect for him (Mashrafe) as he had given lot for us. It was a difficult decision but we have to accept reality.

“We took a combined decision after long discussions with team management and considering everything we (decided to) put off Mashrafe. We discussed everything. We didn't leave anything out,” he added.

Minhajul informed that he had personally talked to Mashrafe before taking the final call.

“I have spoken with him (Mashrafe) and there is no sort of misunderstanding between us. He said he wants to continue playing domestic cricket.”

Minhajul claimed that it would be a massive opportunity for the youngsters to fill the shoe of Mashrafe and was optimistic that they would grab the chance.

“Everyone participated in the discussion including the fitness trainer and bowling coach. For the player who replaces him, it will be a fresh start. We have to expose our young players. It’s a big opportunity for him who will replace Mashrafe in the team.

“The team management had given a plan to us and we have shared our plan and we want to take our cricket ahead and so we have taken this decision. We have to give chance to youngsters,” he added.

The members of the preliminary squad will start their training camp from next week and the ODI squad members are expected to play two practice matches on January 14 and 16 respectively.

The selectors will thereafter name the final squad before the start of ODI series, scheduled on January 20.

Meanwhile BCB also announced a 20-member preliminary squad for the two-Test series against the Caribbean side.

Opener Shadman Islam made it to the preliminary Test squad after his prolonged injury while Test skipper Mominul Haque, off-spinner Nayeem Hasan and pacer Abu Jayed Rahi, who are still recovering from their respective injuries, named in the Test squad.

The players of both the squads will undergo fitness test from today.